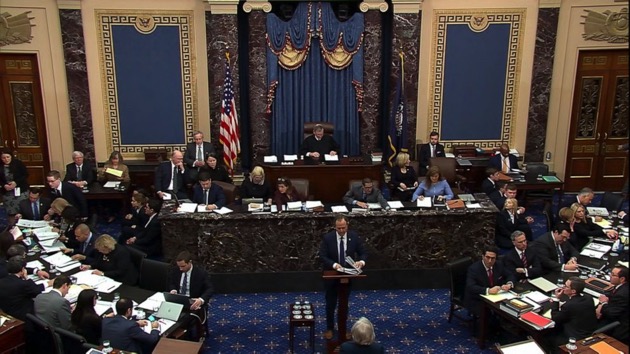 ABC News (WASHINGTON) — President Donald Trump’s impeachment trial resumes Monday morning at 11 a.m. with closing arguments — even though the outcome appears all but certain ahead of a final vote on acquittal set for Wednesday.Each side gets up to two hours to make their case, and while the Democrats can be expected to take up most or all of their allotted time as they’ve done so far, it’s possible the president’s legal team will take much less as they did toward the end of last week.Even though the trial continues, Trump has said he will go to the Capitol Tuesday to deliver his State of the Union Address, as President Bill Clinton did during his 1999 trial. It wasn’t clear, though, whether he would mention his impeachment.Monday’s arguments come after the Senate voted 51-49 Friday to reject calling any new witnesses — a critical defeat for Democrats. Only GOP Sens. Susan Collins and Mitt Romney voted to hear witnesses — while two other other Republicans Democrats were hoping would join them — Sens. Lisa Murkowski and Lamar Alexander — voted no.On Sunday, Alexander further explained his rationale he first made in a statement Thursday night ahead of Friday vote — that while he considered the president’s conduct in the Ukraine affair “inappropriate,” it didn’t, in his view, rise to the level of an impeachable offense and that it was up to voters — not the Senate — to decide how to deal with it.”I think he shouldn’t have done it. I think it was wrong. Inappropriate was the way I’d say, improper, crossing the line. And then the only question left is who decides what to do about that?” Alexander said Sunday on NBC’s Meet the Press.Asked who decides what to do about it, he replied, “The people. The people is my conclusion. You know, it struck me really for the first time early last week that we’re not just being asked to remove the president from office, we’re saying tell him he can’t run in the 2020 election, which begins Monday in Iowa.”Trump and his lawyers have argued he did nothing wrong.”I’m not letting the senators off the hook,” Rep. Adam Schiff, the lead House manager, said Sunday on CBS’ Face The Nation.”We’re still going to go into the Senate this week and make the case why this president needs to be removed. It will be up to the senators to make that final judgment. And the senators will be held accountable for it,” Schiff said.Democrats also can be expected to argue that, without witnesses, the Senate trial wasn’t a real one and therefore an acquittal can’t be seen as an exoneration or vindication of the president.After the closing arguments, senators later Monday and possibly Tuesday will have a chance to make statements on the Senate floor explaining their views and votes.With the president’s acquittal seemingly a done deal, eyes will be on Democrats from Trump majority states — including Sens. Joe Manchin in West Virginia, Doug Jones of Alabama and Kyrsten Sinema of Arizona — to see if they might vote against conviction on either or both of the articles of impeachment alleging “abuse of power” and “obstruction of Congress.”The ABC News team of correspondent and producers is covering every aspect of this story. Here is how the day is unfolding. Please refresh for updates.

11:08 a.m. Trial resumes with Democrats arguing first, Roberts sounds sickThe Senate trial resumes with Chief Justice John Roberts presiding — but with a very noticeably hoarse voice.ABC’s News’ John Parkinson reports from Capitol Hill:The House impeachment managers met again this morning, strategizing before their closing arguments in the Senate trial. I spotted Reps. Zoe Lofgren and Sylvia Garcia in the Capitol this morning, where a dozen U.S. Capitol Police officers are staged outside the meeting room.A Democratic aide to one of the impeachment managers signaled part of the Democrats’ closing argument could emphasize Senate Republicans are party to “a cover-up” by voting against new witnesses. The aide feared that banner headlines on Thursday morning will read that Trump was exonerated.Democrats are also dejected by the constitutional chaos and precedent that results from a failure to remove Trump from office, but the aide indicated GOP senators will now have to defend their record on the campaign trail, as Mitch McConnell works to defend his majority this fall.With the Senate on a glide path to acquit President Trump at 4 p.m. on Wednesday, Democrats, nevertheless, are resigned to a disappointing outcome. While there is still a small chance the Senate could censure President Trump, the aide told me that any symbolic consolidation fails to reassure Democrats after Republicans voted to block new witnesses from being called in the upper chamber’s trial on Friday.While Democrats continue to question Trump’s competence, banking on hope that the president screws up again in the future doesn’t provide any reassurance either, because Democrats don’t trust that anyone would reliably enforce the Constitution. After the special counsel’s Russia investigation failed to provide Democrats with enough ammunition to go after the president, they felt they had a slam dunk with the whistleblower’s account of Trump’s missteps on Ukraine – actions that even Republicans have called “inappropriate.”The bottom line: Democrats say they are astonished that Republicans are letting Trump “get away with it.”