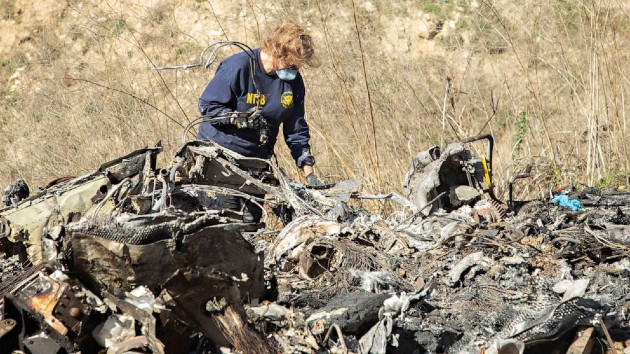 National Transportation Board(LOS ANGELES) — Newly released 911 calls made in the aftermath of the helicopter crash that killed basketball legend Kobe Bryant and eight others underscore the poor weather conditions that the aircraft was flying in.There were multiple calls made into the Los Angeles County Fire Department dispatch center about the Jan 26. crash that happened in Calabasas, California, which were obtained by ABC News affiliate KABC-TV. Despite being close to the aircraft or the eventual site where it crashed, some callers said they were unable to see the aircraft due to thick fog.”I’m walking in the trail I could hear the plane, I think it was, in the clouds, but couldn’t see it. Then we just heard a ‘boom’ and a dead sound and then I could see the flames,” one caller said, mis-identifying the aircraft as an airplane, rather than a helicopter.Another caller told dispatchers that the helicopter crashed into a mountain and that he was looking at the burning wreckage.One caller, speaking to ABC News’ Tom Yamas, described the poor visibility in the foggy conditions: “Imagine jumping into a pool filled with milk, and opening your eyes.””It went over my head. It’s thick in clouds. And then I heard a pop and it immediately stopped,” another caller told dispatchers. “If this guy doesn’t have night vision, I mean, he was, he’s completely IFR,” in an apparent reference to Instrument Flight Rules, which govern flights which rely on instrument readings rather than visual reference.The weather conditions are one factor being examined as a potential cause of the crash by the National Transportation Safety Board’s (NTSB) probe into the incident.Island Express, the helicopter company that owned the helicopter involved in the accident announced last week that it was cancelling all flights until further notice.The NTSB is expected to release a preliminary report of its investigation as early as this week.

Timeline: When did officials tell people to evacuate from Hurricane Ian?

Next steps for victims of Hurricane Ian, from insurance claims to FEMA aid