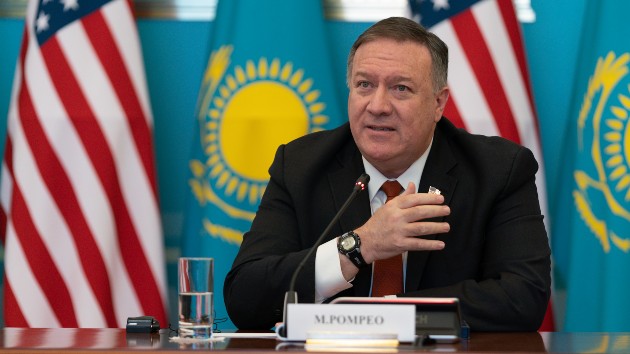 State Department Photo by Ron Przysucha/ Public Domain(WASHINGTON) — Secretary of State Mike Pompeo’s attacks on National Public Radio and what he called the “unhinged media” are being heard around the world.While traveling in Central Asia over the weekend, the top U.S. diplomat faced questions from a local reporter about whether he retaliated against the radio network after being pressed by one of its reporters on his treatment of the former U.S. ambassador to Ukraine — and what message doing so sends to repressive governments.Pompeo said that his actions send “a perfect message about press freedoms,” but it seemed to undermine his message to the former Soviet states about increasing transparency and civil liberties.Kazakhstan, Uzbekistan and Belarus all hosted Pompeo this past weekend for high-level visits, where he encouraged each government to implement reforms, according to his spokesperson, including to strengthen fundamental freedoms.But each state is known for its repressive policies, particularly against a free press. According to Reporters Without Borders, Belarus ranks 153rd out of 180 countries for press freedom, Kazakhstan is 158th, and Uzbekistan, 160th. Journalists in each country have been harassed and arrested, media outlets have been shut down or censored, and much of the media is government-controlled.Journalists from the U.S.-funded Radio Free Europe/Radio Liberty’s Kazakh service were attacked last March while covering an anti-government protest in Kazakhstan’s newly renamed capital, Nur-Sultan, while two of the network’s reporters were arrested. Authorities have not arrested or held anyone accountable for the attack, according to RFE/RL’s Kazakh service Radio Azattyq.

It was a correspondent from Radio Azattyq who pressed Pompeo on his own lashings of the press.

Aigerim Toleukhanova asked Pompeo, “Last year RFE-RL journalists were physically attacked while doing their jobs, multiple times, and authorities have made no progress to try to find those responsible. Before you departed to this trip you had a confrontational interview with a National Public Radio reporter, and after that trip your department removed another NPR reporter from the press pool. Did you retaliate against NPR? What kind of message does it send to countries like Kazakhstan, Uzbekistan, and Belarus, whose governments routinely suppress press freedom?”Days before leaving on the trip, Pompeo berated Mary Louise Kelly of NPR in his office — according to her account that he didn’t deny — calling her a liar, using the f-word, and challenging her to find Ukraine on an unmarked map — after she asked him whether he should apologize to Marie Yovanovitch, the career ambassador who was ousted from her post in Kyiv after being smeared by President Donald Trump, his lawyer Rudy Giuliani, and their associates.Pompeo said Kelly agreed to not ask about Ukraine, although emails released to the Washington Post show otherwise, and not to discuss their post-interview meeting, which Kelly also says is not true.Days after the tirade, the State Department kicked another NPR reporter off Pompeo’s trip to Europe and Central Asia, even though they were the only pool reporter for radio outlets. The State Department did not respond to questions about that decision, but Pompeo seemed to confirm that he made the decision to do so to punish NPR.”I always bring a big press contingent, but we ask for certain sets of behaviors, and that’s simply telling the truth and being honest. And when they’ll do that, they get to participate, and if they don’t, it’s just not appropriate,” he told Radio Azattyq Sunday.The Trump administration has limited the number of reporters traveling with the secretary of state. While it improved from an initial zero under Pompeo’s predecessor, Rex Tillerson, to six seats now, it’s still less than half the press pool that traditionally traveled.

The once-daily press briefing with the department spokesperson in Washington has not been held since Sept. 12 and hasn’t been held regularly under Trump. Instead, the department has in recent months held more off-camera briefings with senior officials, but the daily briefing was a critical opportunity for journalists to question the department on a variety of urgent and longer-term issues.Pressed by Toleukhanova from Radio Azattyq on what message his attacks on NPR send, Pompeo doubled down, saying, “It’s a perfect message. It’s a perfect message about press freedoms.”Copyright © 2020, ABC Audio. All rights reserved.