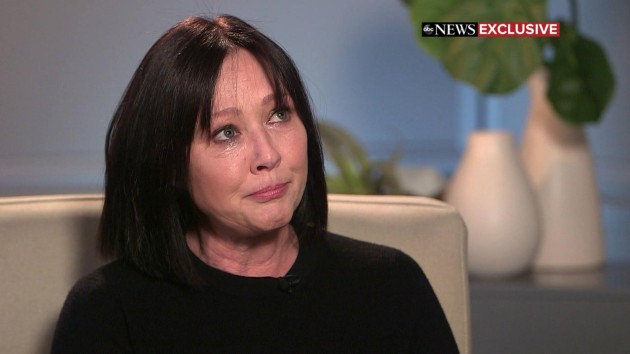 ABC News(NEW YORK) — Shannen Doherty has always been transparent about the struggles she has faced. Now, the actress has revealed a new struggle that she’s kept out of the public eye.”It’s going to come out in a matter of days or a week that — I’m stage four. So my cancer came back. And that’s why I’m here,” Doherty told ABC News’ Amy Robach in an interview that aired Tuesday on Good Morning America. “I don’t think I’ve processed it. It’s a bitter pill to swallow in a lot of ways.”In the interview, the 48-year-old opened up about her breast cancer’s recurrence and how she coping with it.”I definitely have days where I say why me. And then I go, well, why not me? Who else? Who else besides me deserves this? None of us do,” she said. “But I would say that my first reaction is always concern about how — how am I going to tell my mom, my husband.”Since her initial breast cancer diagnosis in March 2015, the actress of popular hit shows like Charmed and 90210 has always been candid about her disease by documenting her battle on social media.But this time around, Doherty decided to keep the news to herself and despite the diagnosis, went back to work on the set of the 90210 reboot, which was also just four months after her friend and former co-star, Luke Perry’s passing.”It’s so weird for me to be diagnosed and then somebody who was, you know, seemingly healthy to go first,” said Doherty. “It was really, like, shocking. And the least I could do to honor him was to do that show. I still haven’t done, in my opinion. So it’s a hard one.”Doherty also said that she didn’t tell anyone about her recurrence because she wanted to prove that she was still able to work.”One of the reasons, along with Luke — that I did 90210 and didn’t really tell anybody because I thought, people can look at that other people with stage four can work too. Like, you know, our life doesn’t end the minute we get that diagnosis. We still have some living to do,” she said.While she kept her diagnosis a secret, telling only a small group of people, Doherty said she leaned on actor, Brian Austin Green, one of her 90210 co-stars, to help her get through grueling, 15-16 hours-long filming days on set.”I had moments of great anxiety where I thought, ‘I can’t really do this,’ and Brian was the one person who — of that group of people that knew — that I told, like, pretty quickly and said, ‘Here, the — this is what I’m dealing with,"” she said. “So prior to shooting he would always call me and say, ‘Listen, you know, whatever happens, I have your back.’ He would look at me and be like, ‘We got this, kiddo’… so Brian helped me through a lot.”Amid her battle with cancer, Doherty is also in the middle of a legal fight with her insurance company State Farm.Doherty sued State Farm after her California home was damaged in the Woolsey Fire in 2018. She said she is opening up about her cancer diagnosis now because her health conditions could come out in court documents ahead of any trial.”I’d rather people hear it from me. I don’t want it to be twisted. I don’t want it to be a court document. I want it to be real and authentic,” Doherty said. “And I want to control the narrative. I want people to know from me, I just didn’t want them to know yet.”Doherty claims that she has been forced to pay out of pocket for losses she believes should be covered by her insurance policy and that some of her claims have been unjustly denied.”I communicated with my insurance company, I called, I got passed around from claims adjuster to claims adjuster, so I ended up suing State Farm,” she said. “And the result has been one of the most horrific processes I have ever been through.”According to court documents, State Farm says they have paid nearly $1.1 million to clean and repair the plaintiff’s home and personal property and for temporary housing and furniture rental and stating that the “plaintiff nevertheless alleges she is entitled to additional benefits under her Homeowner’s Policy.””We empathize with Ms. Doherty’s health issues and wish her a full recovery,” State Farm said in a statement to ABC News. “We strongly believe we have upheld our commitment to our customer and have paid what we owe on this claim. We are prepared to defend our position in court.”With all that she’s been through, Doherty isn’t letting anything slow her down and is using her platform to make a difference and defend others who have been or are going through similar experiences.”I think the thing I want to do the most right now is I want to make an impact,” she said. “I want to be remembered for something bigger than just me.”

Woman claims she got HPV-related cancer after nail salon visit

Ashley Tisdale shares struggle with hair loss: What to know about alopecia