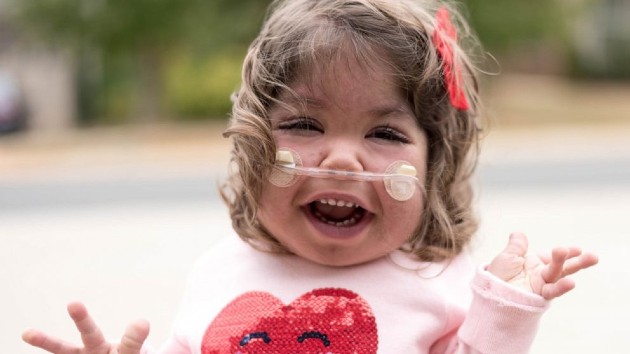 Maleigh Hightshoe(CHARLOTTE, N.C.) — A toddler who had trouble getting around with her oxygen tank is now getting help from a kind group of sixth grade students.Emmett Hightshoe was diagnosed with Kabuki syndrome in utero. It’s a rare genetic disorder impacting organ development, as well as her physical and cognitive abilities. But Emmett’s health obstacles doesn’t stop her from being a typical 2-year-old.”She’s certainly sassy and strong-willed,” mom Maleigh Hightshoe of Charlotte, North Carolina, told ABC News’ Good Morning America. “She’s so happy, loved, very much a people-person which is great because it helps us know if something isn’t going well.”Because the left side of Emmett’s heart is underdeveloped, it affects her lungs and she carries an oxygen tank daily to help them relax.She also uses a walker because of her low muscle tone.”She’s fought and shown us that she wants to do more and be independent and that’s when all of this started to present itself,” Hightshoe said.During a local 5K run, Hightshoe met Ben Davis, a teacher of engineering courses like design and modeling, automation and robotics at McClintock Middle School in Charlotte.”This past summer we got to talking and he saw her oxygen tank,” Hightshoe said of Davis. “It stirs the question, ‘How do you get around?"”Hightshoe said that sometimes the tubing from Emmett’s oxygen tank will get caught in areas of her walker or the wheels would go over it.That’s when Davis’ design and modeling class at McClintock got to work. The students built prototype holders for Emmett using 3D printers.”All the ideas were really unique,” teacher Ben Davis said, adding it took the kids three months to complete their designs. “From the very first day, they were lit up and excited and happy — they had millions of questions about Emmett.”Davis said the students did research by measuring the bars on Emmett’s walker and testing their designs on a loner from the brand which distributes her oxygen tank.One group decided that Emmett’s oxygen tank was heavy, so they designed their holder on caster wheels.Another group learned that Emmett sits and scoots along the ground. Those students invented a pull cart design with a handle for her.Emmett’s mom decided on four different designs.”Their enthusiasm about this and watching those kids learn about Emmett… they say, ‘She’s just a little girl. She’s just like us she needs help,"” Hightshoe said. “That was really encouraging.”

New injection for newborns to protect against RSV approved in Europe