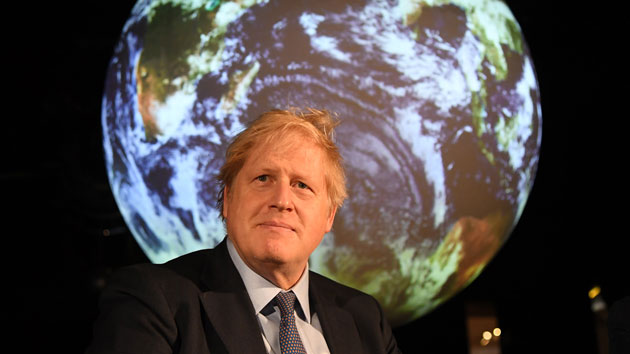 Jeremy Selwyn – WPA Pool/Getty Images(LONDON) — Gasoline, diesel and hybrid cars will be relics by 2035 if U.K. lawmakers get their way.Prime Minister Boris Johnson, speaking at a launch event for a United Nations climate summit, said Tuesday that new sales of these vehicles will cease in the next 15 years, the BBC reported.The announcement expands a 2017 government goal to end the sale of gas and diesel cars by 2040 by moving the deadline up five years and including hybrid vehicles.The U.K.’s Transport Secretary Grant Shapps said in a statement that the government’s nearly $2 billion strategy to convince consumers that owning an electric vehicle was easy “is working,” adding that in 2019 “a fully electric car was sold every 15 minutes.””We want to go further than ever before,” he added. “That’s why we are bringing forward our already ambitious target to end the sale of new petrol and diesel cars to tackle climate change and reduce emissions.”Johnson’s office said in a statement that the government will “continue to work with all sectors of industry to accelerate the rollout of zero emission vehicles.”In a tweet from his office, Johnson posted a video of the news, claiming that the U.K. is a world leader in tackling climate change.The announcement appeared to catch the U.K. auto industry by surprise.The Society of Motor Manufacturers and Traders trade group called it a “date without a plan.””It’s extremely concerning that government has seemingly moved the goalposts for consumers and industry on such a critical issue,” Mike Hawes, the trade group’s CEO, said in a statement.While he added that manufacturers are “fully invested in a zero emissions future,” demand for this technology is “still just a fraction of sales,” he noted. “It’s clear that accelerating an already very challenging ambition will take more than industry investment.”He continued: “So we therefore need to hear how government plans to fulfill its ambitions in a sustainable way, one that safeguards industry and jobs, allows people from all income groups and regions to adapt and benefit, and, crucially, does not undermine sales of today’s low emission technologies, including popular hybrids, all of which are essential to deliver air quality and climate change goals now.” Copyright © 2020, ABC Audio. All rights reserved.