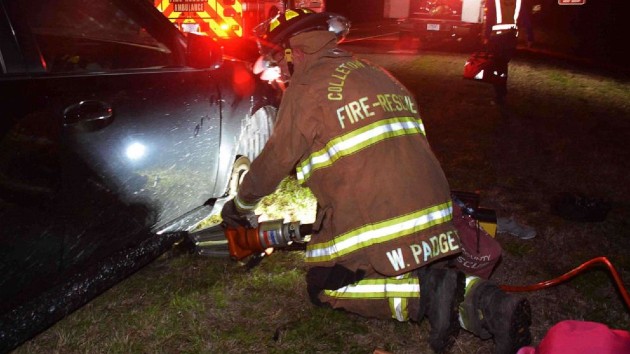 Colleton County Fire-Rescue(NEW YORK) — A woman whose hands were crushed by her car while she was changing a tire on the side of a road managed to save herself by using her toes to call 911.A 54-year-old woman from North Carolina suffered a flat tire on a dark section of I-95 in Colleton County, South Carolina, just before 7 p.m. on Sunday when she pulled over into the breakdown lane to inspect it.The unnamed woman then removed the flat tire and began replacing it with the spare she kept in her car when the unthinkable happened.“The jack slipped causing the car to fall, crushing both of her hands between the tire and the fender,” said Colleton County Fire-Rescue [CCFR] in a statement. “She was trapped alone on the side of the dark interstate, experiencing excruciating pain.”For 35 minutes the woman was stuck with the weight of the car crushing her hands but she was somehow able to slip off one of her shoes during the incident and dial 911 with her toes to inform the emergency services about her predicament. Authorities arrived 8 minutes later.“[Colleton County Fire-Rescue] used a prybar without success and then deflated the tire to remove the air, however the car jut dropped as the tire deflated,” said CCFR. “Using the prybar, they were able to free one hand.”A fire engine arrived a short time later and, using a hydraulic spreader, were able to free her other hand.The woman ended up suffering severe damage to both hands and all of her fingers in the accident and was transported to the trauma center at Trident Hospital to be treated for her injuries.The woman is expected to survive but her current condition is unknown. Copyright © 2020, ABC Audio. All rights reserved.