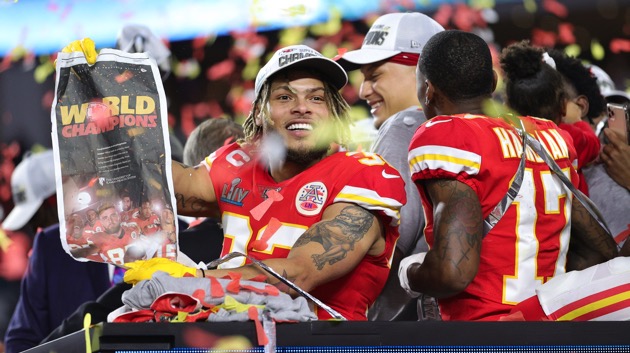 Maddie Meyer/Getty Images(KANSAS CITY, Mo.) — The Chiefs are back in Kansas City with some shiny new hardware and to celebrate their first NFL title in 50 years, the team will celebrate with fans in a sea of red for the Chiefs Kingdom Champions Parade.

THIS IS ON REPEAT ? pic.twitter.com/4rglVJGy9F

THE SEA OF RED ?(and more coming) pic.twitter.com/GpsKjMw716

The two-mile parade route starts on Grand Boulevard at Sixth Street and heads southwest to finish at Union Station.

The victory rally will start just after the parade concludes and the team will take the stage in front of Union Station.

Before the parade officially got underway, Kansas City Police responded to a vehicle that broke through the parade barrier.

Police said they used tactical vehicle intervention, but did not know the unidentified suspect’s motive.For updated information on transit, public safety, and other news about the parade, the city created sign-ups for fans to receive notifications from ALERTKC by texting “CHIEFSPARADE” to 888-777. Copyright © 2020, ABC Audio. All rights reserved.