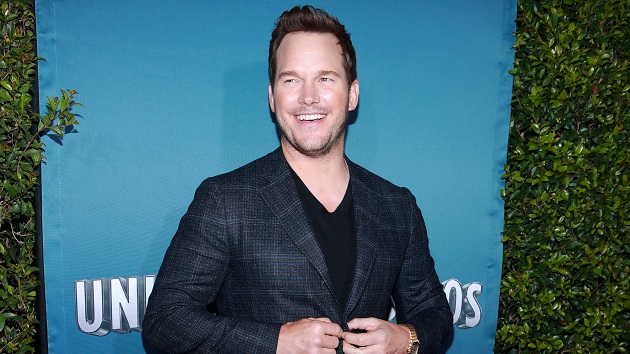 Rich Fury/Getty Images for Universal Studios Hollywood(LOS ANGELES) — Chris Pratt has just unveiled the next chapter in his life, acting as the CEO of his brand new company.

On Tuesday, the Guardians of the Galaxy star gave fans a glimpse on Instagram of his new production studio, called Indivisible Productions.  However, the actor first had to take a humorous walk down memory lane before the big reveal.

“A musical sneak peak at the walls inside my office,” writes Pratt as the video opens with him walking past a 3D portrait of himself.

“Let’s go on a journey to see how everything has changed,” he declares as the portrait changes from his face to that of his character Emmet from The Lego Movie.

Then, the 40-year-old launches into a music montage as he looks at posters documenting the most well-known projects throughout his career, such as Everwood, Parks & Recreation, and Jurassic World.  As he focuses on each image, he soulfully performs their respective theme songs.

However, as he focuses in on a poster for Avengers: Infinity War, he dramatically cries out to his character Star-Lord, “DUDE! Why’d you punch Thanos?!”

With that, he triumphantly slaps a card bearing the name “Indivisible Productions” against the glass as he teases, “Get ready.”

Pratt opened up about his new venture in the caption, explaining, “I’ve started a company.  Indivisible Productions.  One nation.  Under God.  Indivisible.”

The Onward actor also revealed what his fans can expect from his business, “Our mission statement is to create entertaining content, focusing on themes which will help to bridge the growing divide in our country and world. You know, make the world a better place. No biggie, you’re welcome, but it’s whatever.”

Pratt next stars in Disney’s Onward, which premieres on March 6.