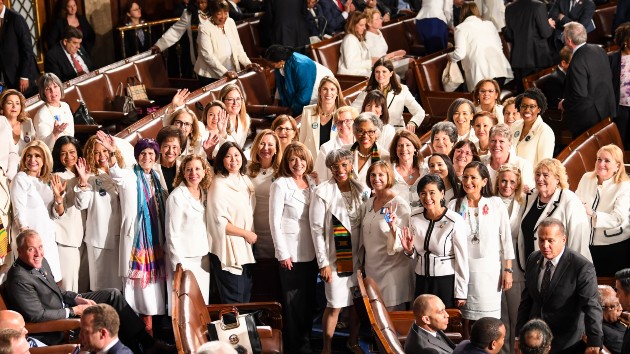 Toni L. Sandys/The Washington Post via Getty Images(WASHINGTON) — The Democratic Women’s Caucus urged women to wear white to President Donald Trump’s State of the Union speech on Tuesday to symbolize that they are aligned and “not backing down.”House Speaker Nancy Pelosi was among the dozens of female U.S. lawmakers who donned white during the event to stand in solidarity with the fight for women’s equality. Pelosi said she was “proud” to join her fellow House Democrats in wearing white.”Proud to join my fellow @HouseDemWomen,” she tweeted. “Today as we #WearWhite to show support for the ongoing fight to achieve equality for women across the country.”

Proud to join my fellow @HouseDemWomen today as we #WearWhite to show support for the ongoing fight to achieve equality for women across the country. pic.twitter.com/EF3C0idZxc

The color pays homage to the women’s suffrage movement that led to the ratification of the 19th Amendment in 1920, which guaranteed women the right to vote.The Democratic Women’s Caucus tweeted an image of some of the lawmakers in white about three hours ahead of the president’s address. In the photo’s caption, the group said they wore white to “to show our persistence as we fight #ForThePeople.”Using the hashtag “WearWhite” the group said the effort was meant “to stand against @realDonaldTrump’s dangerous policies. To make sure the voices of women and families are heard. And to let @POTUS know that we’re not backing down. #SOTU.”The Democratic Women’s Caucus organized a similar demonstration ahead of last year’s State of the Union address to mark the 100th anniversary of Congress passing the 19th Amendment.The bold color choice was also a hat tip to the record number of women elected to Congress at the time.Copyright © 2020, ABC Audio. All rights reserved.