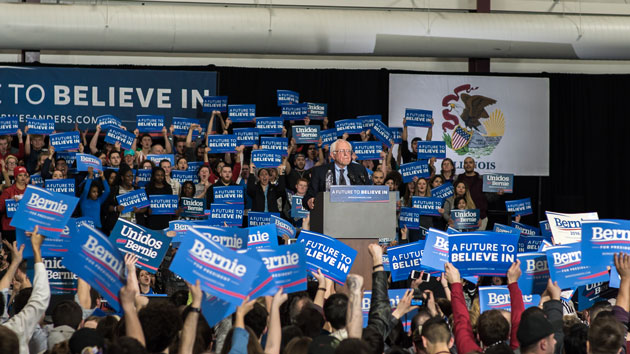 dx312/iStock(WASHINGTON) — Ahead of the New Hampshire primary, former Hillary Clinton national press secretary Brian Fallon told ABC News’ “Powerhouse Politics” podcast he’s “intrigued” by Vermont Sen. Bernie Sanders’ campaign strategy to motivate his supporters as the general election inches closer.”I’m somebody that’s actually intrigued by Bernie Sander’s theory of electability in the general [election],” Fallon told ABC News’ Political Director Rick Klein and Chief White House Correspondent Jon Karl.Fallon said one way the Sanders campaign has strengthened since 2016 is by mobilizing communities of color.”I do think that there’s a potential for him to sort of be a coalition candidate in that respect,” he said, adding that the senator’s unique way of drawing support “actually helps him, with voters, seem authentic and true to himself.”On Sunday, President Donald Trump described Sanders as a “communist” during a pre-Super Bowl interview with Sean Hannity.In response to Trump’s comments, Fallon said Sanders will fight that label.”I think that there’s an authenticity factor to Bernie that might override that,” Fallon said, citing that Sanders sticking to the Democratic Socialist brand helps with his genuineness to voters.Following Monday’s meltdown following the Iowa caucuses, he also said the debacle could mark the end of the state’s first-in-the-nation status, adding to the growing voices who have expressed a similar sentiment.There’s “just so many anecdotal evidence of just gimmicks and coin flips and gamesmanship in terms of, you know, what happens on second alignment to try to deprive people of delegates,” Fallon said of the “coding issue” that brought the election contest in Iowa to a halt.”It’s just not a way to pick a president,” he said. “So you add in the lack of diversity and the lack of representativeness of the Democratic base … its days are numbered.”The veteran Democratic operative also weighed in on the state of the Democratic party, saying the party has to “wake up,” and realize how difficult it will be to defeat Trump in the general election.”I still think that there’s multiple candidates in the field that could beat Trump,” Fallon told the podcast hosts. “I do think people should wake up to how difficult that it’s going to be to beat him.”He added, “I think that, you know, the economy is in decent shape. His numbers have stabilized, notwithstanding impeachment.”The incoming results out of Iowa — with about 75% of precincts reporting thus far — show former Vice President Joe Biden in fourth place, with Sanders in second place, following closely behind former South Bend, Indiana mayor Pete Buttigieg.When Karl asked Fallon about Biden’s campaigning on electability and his chances looking ahead of the New Hampshire caucuses, he didn’t count him out, but said he will have to push harder.”Up till now, he’s mostly run a Rose Garden type campaign,” Fallon said. “He’s not very selective at all in terms of engaging with the other candidates.”And while he didn’t seem surprised Biden didn’t win Iowa, Fallon told the hosts that Biden could win voters’ support with a comeback story by acknowledging his loss and explaining what’s at stake if he doesn’t get their support.”Now, post-Iowa, he’s got to be a little scrappy,” he added.

Though, he warned things have a way of turning around in the Granite State.New Hampshire has a “tradition of being willing to go counter to what Iowa does,” he said.The Democratic candidates will once again have a chance to make their case on the debate stage – hosted by ABC News and affiliate WMUR-TV — on Friday before New Hampshire voters head to the polls next week.Powerhouse Politics podcast is a weekly program that posts every Wednesday, and includes headliner interviews and in-depth looks at the people and events shaping U.S. politics. Powerhouse Politics podcast is hosted by ABC News Chief White House Correspondent Jonathan Karl and ABC News Political Director Rick Klein.Copyright © 2020, ABC Audio. All rights reserved.