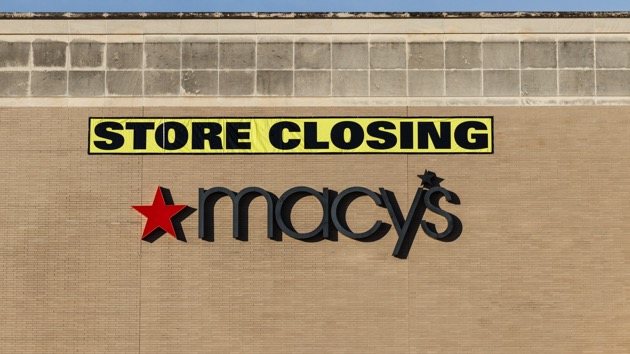 jetcityimage/iStock(NEW YORK) — In another signal of a changing landscape for American retailers, Macy’s announced a massive restructuring that would involve shuttering 125 department stores, cutting 2,000 jobs and closing three corporate offices.Once a mall staple, Macy’s joins a growing list of brick-and-mortar retailers that have struggled in recent years with the rise of e-commerce giants and changing consumer tastes. Experts have said there is “a lot more pain to come” for many stores once titans of the retail space.  Macy’s CEO Jeff Gennette emphasized on Tuesday that the company has a “clear vision” of how it will “fit into retail today” as he unveiled the restructuring plan.”We will focus our resources on the healthy parts of our business, directly address the unhealthy parts of the business and explore new revenue streams,” Gennette said in a statement. “I know we will come out of this transition stronger, more agile and better fit to compete in today’s retail environment.”As part of the revamped strategy, the retailer said it hopes to focus on digital growth and its website.The company, which currently operates 680 stores, will close 125 of its “least productive stores” over the next three years. It will also open smaller Market by Macy’s stores, specifically not in malls, that will feature “merchandise and local goods, as well as local food and beverage options and a robust community events calendar.” The first is scheduled to open in Dallas on Thursday.Finally, the company is expected to reduce overall corporate headcount by 9% and shutter offices in San Francisco, Cincinnati and Lorain, Ohio. New York City will now house Macy’s sole corporate headquarters.While Macy’s remains profitable, the company’s sales have declined in recent years and its stock has fallen by more than 30% over the past year. Shares for other mall outlets like J.C. Penney’s and Kohls have similarly fallen over the past year.The news is an “excruciatingly painful reminder of the digitalization of the future of shopping experiences,” Eric Schiffer, CEO of the private equity firm Patriarch Organization, which focuses on retail, told ABC News Wednesday.”This is a blood bath, and Macy’s, in particular, I think you’re going to see them lose another third if not two-thirds of their stores,” Schiffer said. “There is a lot more pain to come and more eroding in traditional retail.”The shift is “largely powered by convenience, digitization, and greater dominance of the major players like Amazon and others who work at a blistering level of competition,” he added, noting that a lot of the products Macy’s sells “are things you can get online.””All of these moves, the closing of the corporate office, the shuttering of stores, is a Band-Aid on a major systemic problem,” he said.Stacey Widlitz, president of SW Retail Advisors, said the Macy’s restructuring announcement wasn’t a surprise.”Last year, we had almost 10,000 stores close in the U.S., and I think we are headed for a repeat in 2020,” she told ABC News. “I think we know that the department store space is losing a ton of share and needs to close a lot more stores.””You look at J.C. Penney’s, you look at Macy’s, you can argue that many more store closings need to happen — and will likely happen,” she added.Widlitz noted that one key issue for struggling department stores is that they “are all selling the same brands, the differentiating factor is price, and that’s a losing battle.”Cosmetic sales used to be a key driver of traffic into department stores, Widlitz added, saying, “That whole concept is over.””Now, you’ve seen that business go to Ulta, go to Sephora, go to direct, so now you don’t need to go to a department store for someone to tell you look great,” she said.Fellow mall chain Forever 21 filed for bankruptcy in late September, but the company announced earlier this week it could be bought by a group of mall owners.Iconic New York City-based retailer Barneys filed for bankruptcy in late 2019.As for the malls many Americans grew up going to, keeping them operating at the same pace will be a “struggle,” Schiffer said.”Those who can figure out how to stick with the right brands and get the experience and are hot will still do OK,” he added. As for those that can’t attract foot traffic or aren’t known for providing an experience, “Then it’s like the Black Death.”Copyright © 2020, ABC Audio. All rights reserved.