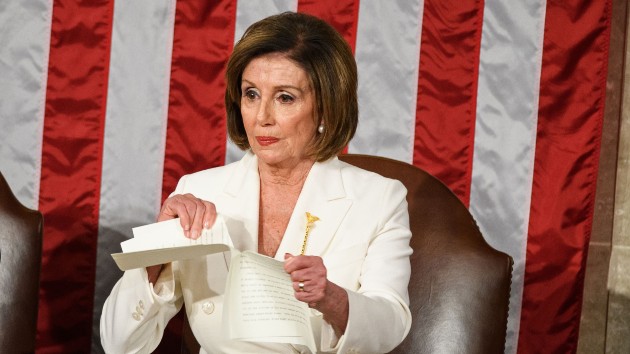 MANDEL NGAN/AFP via Getty Images(WASHINGTON) — In a moment that bookended an already divided night at the Capitol, House Speaker Nancy Pelosi tore in half a copy of the State of the Union address given to her by the president just as he finished speaking.President Donald Trump didn’t appear to notice as Pelosi, standing behind him in the gallery, ripped up the papers. When asked after the event why she ripped up the speech, Pelosi told reporters it was “because it was a courteous thing to do considering the alternative. It was such a dirty speech.”The White House responded on Twitter, writing that Pelosi tearing up the pages was “her legacy.”

The address put America’s divided politics on display, with Republicans offering up raucous support while Democrats mainly glared on and kept quiet.One such moment was when Trump called California “a very terrible sanctuary,” a comment not included among his prepared remarks.”The State of California passed an outrageous law declaring their whole State to be a sanctuary for criminal illegal immigrants — a very terrible sanctuary — with catastrophic results,” Trump said.Pelosi’s jaw dropped at the comment. She represents California’s 12th congressional district, which includes San Francisco.Other House Democrats at time could be heard booing, while Rep. Tim Ryan, D-Ohio, and Rep. Bill Pascrell, D-N.J., walked out.