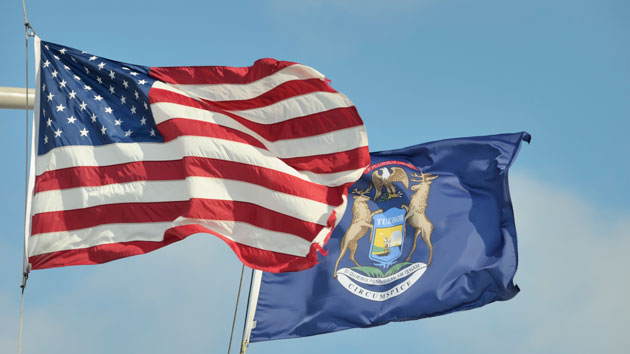 RiverNorthPhotography/iStock(SALINE, Mich.) — A community in Michigan is reeling after video captured a man making a racist comment toward another parent at a meeting that had been called to discuss concerns about diversity and acceptance at schools.Adrian Iraola was standing up with a microphone Monday, sharing a story with parents and school administrators, in Saline, Michigan, about how racism in the school had been affecting his child when he was interrupted.”I remember when I went to his bedroom, to say good night, and he was crying because of the abuse that he was enduring in this school system,” Iraola, who is Latino, began at Liberty School.Suddenly, as he was midsentence, a man behind him spoke out.”Then why didn’t you stay in Mexico?” asked the man, who was identified by Ann Arbor News/MLive.comas Tom Burtell.The video was taken and shared by Ann Arbor News/MLive.com.The remark was met with audible gasps as parents and attendees turned around to look at Burtell, who is white.”You need to leave,” a woman could be heard saying in the video obtained by ABC News.”That’s disgusting,” another woman said.Iraola is the father of three former students and said he came to the U.S. 40 years ago and owns three Mexican restaurants.The school district, which is predominantly white, had no comment about the video Tuesday.According to Ann Arbor News/M Live.com, the meeting on Monday had been called to discuss solutions after remarks made in a social media group in January by some high school students had been deemed an “act of racism” by administrators.”On Monday, January 27, it was brought to the attention of our staff and administration that offensive and inappropriate racist comments using derogatory terms about African Americans were posted on social media by Saline High School students,” Superintendent Scot Graden said in a Jan. 27 letter. “Hate, prejudice and racism have no place in our schools or our community.”Ann Arbor News/M Live.com said the high school students had used the “N-word” and included gorilla emojis in the chat. At Monday’s meeting, Iraola offered Burtell the microphone so he could speak but he declined.”He asked me a question. … ‘Why didn’t I stay in Mexico?"” Iraola said. “Because this is the greatest country in the world.””But you’re complaining about being here,” Burtell said.In another video posted by Arbor News/MLive.com, Burtell said he’d been a victim of racism “all the time.””Try being white and walk in a black neighborhood,” he told the parents. “See what happens.”Tim Burtell, Tom’s son, told ABC News on Tuesday that none of his 10 siblings condoned their father’s actions.”The only message I want to say is that our family condemns our father’s vile beliefs,” said Tim Burtell said in a statement to ABC News from all 11 children and their mother, Joanna.Brian Wright, who said in another video posted by Arbor News/MLive.com that his son had been a victim of racist comments in school, called Burtell’s remarks during the meeting “flat-out racist” and said they were indicative of what children of color were dealing with every day.Wright, who is black, encouraged the parents at the meeting to remember the feelings they experienced when they heard Burtell’s remarks.”This is not an isolated event. And unfortunately, every time this happens, we treat it as an isolated event. We just had an outburst in here, all right? We all had some type of emotion. Regardless of what side you sit on, myself included, I’m still reeling from that emotion. Hold onto that. Because that’s what the minority kids are experiencing on a weekly basis,” he said.