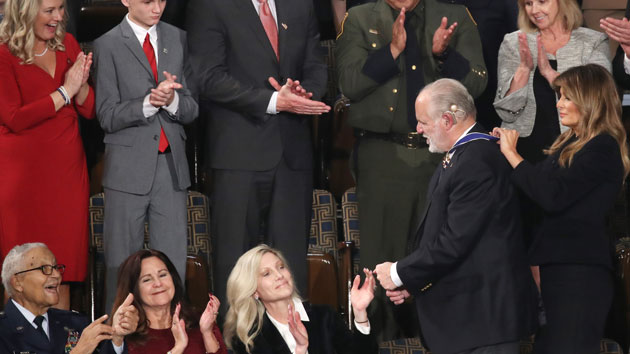 Drew Angerer/Getty Images(WASHINGTON) — In a night full of divisive moments, President Donald Trump’s decision to award the Presidential Medal of Freedom to conservative talk show host Rush Limbaugh — a polarizing figure who has insisted it was unfair to blame white Americans for slavery, blamed gay marriage for the decline of Christianity, and attempted to slut-shame a woman seeking coverage for contraception — stood out.Trump announced Tuesday night during his State of the Union address that first lady Melania Trump would present the honor, the country’s highest for a civilian, to Limbaugh. Limbaugh announced earlier this week that he is fighting advanced lung cancer.Trump praised Limbaugh for “all that you have done for our nation, the millions of people a day that you speak to and you inspire, and all of the incredible work that you have done for charity.”Limbaugh has raised money for the Leukemia & Lymphoma Society and ran a campaign for the Stephen Siller Tunnel to Towers Foundation, which supports first responders and the military, in response to former NFL player Colin Kaepernick criticizing a Nike shoe featuring the Betsy Ross flag.While the move drew applause from Republicans, it drew the ire of some Democrats and advocates for marginalized groups and issues.Rep. Alexandria Ocasio-Cortez, D-N.Y., who skipped the address, said in an Instagram video that the medal is “extraordinarily sacred” as anyone awarded it is in the ranks of iconic figures such as Rosa Parks.She then called Limbaugh a “violent racist” and said the decision to present the honor to him during the State of the Union “cheapens the value of it.”Former Vice President Joe Biden condemned Trump in a statement for presenting the award to Limbaugh and not Charles McGee, one of the last surviving Tuskegee airmen who was in attendance and honored by Trump earlier in the night. Trump said he signed a bill a few weeks ago promoting McGee to brigadier general and pinned the star on McGee earlier Tuesday.Biden praised McGee as “the real American hero in the gallery,” while calling Limbaugh “a conservative media personality who has done as much as Trump himself to divide our nation.”While Limbaugh’s diagnosis drew well-wishes from some on both sides of the political divide, it also prompted a conversation about his past comments and views on topics such as immigration, women’s rights and race.Ilyse Hogue, the president of NARAL Pro-Choice America, cited in a statement one such instance in 2012 when Limbaugh called Sandra Fluke, then a Georgetown University law student, a “slut” after she argued to Congress that birth control should be covered by her employer’s health care plan.He later apologized to Fluke and said his “choice of words was not the best,” although he had repeated the claim in various forms multiple times.Hogue used the incident to describe what she called Limbaugh’s “lifetime of racism, homophobia and misogyny.”As many other critics who made statements or posted on social media noted, Limbaugh has made numerous derogatory comments about minority groups as well as offensive comments about AIDS and the LGBTQ community, suicide and many other sensitive topics and marginalized communities.Limbaugh said on his talk show in 2013 that “white guilt needs to end.””If any race of people should not have guilt about slavery, it’s Caucasians. The white race has probably had fewer slaves and for a briefer period of time than any other in the history of the world,” he said, identifying his statement as a “history lesson.”He also described the NFL as “a game between the Bloods and the Crips without any weapons,” effectively comparing black professional football players to gang members.Limbaugh later said that the NFL comment he made in 2007 was “not racial.”Of the LGBTQ community, Limbaugh blamed gay marriage for a decline in Christianity in 2015.”Many of these churches now perform homosexual marriage, they ordain gay pastors or ministers, and, in some cases, female and lesbian pastors and ministers, which you might think would cause some people to leave those churches,” he said on his talk show.Just a little more than a week before Limbaugh was presented with the Presidential Medal of Freedom, he suggested on his radio show banning Chinese citizens from entering the U.S. amid the coronavirus outbreak, which has prompted anti-Chinese racism around the world.”This is a serious thing that could be brewing out there, and just a question that I’m asking,” Limbaugh said.The director of the National Center for Immunization and Respiratory Diseases last week called for people to not discriminate against Chinese people.Copyright © 2020, ABC Audio. All rights reserved.