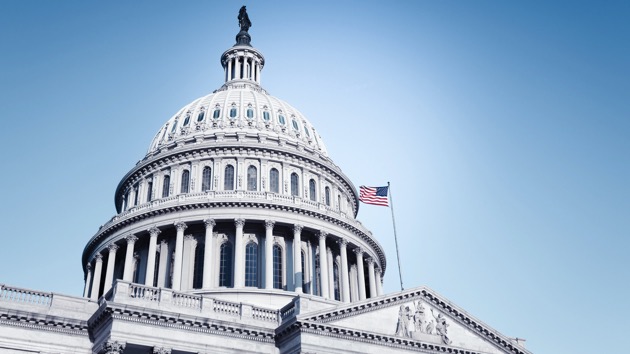 uschools/iStock(WASHINGTON) — The months-long impeachment and Senate trial of President Donald Trump comes down to an anticlimactic end Wednesday afternoon with a 4 p.m. vote all-but-certain to end in his acquittal.Still, it will be a dramatic moment when each senator’s name is called, and standing at their desks, will pronounce Trump “guilty” or “not guilty” as required by Senate rules. The Constitution requires “[N]o Person shall be convicted without the Concurrence of two-thirds of the Members present.”Trump is only the third president in U.S. history to face an impeachment trial, but largely because Republicans have a 53-47 advantage, his fate has been more or less a foregone conclusion since even before the proceedings began. He made no mention of the Senate trial in his State of the Union address Tuesday night, in the House chamber where he was impeached, but reporters might have a chance to ask him about it Wednesday.One of the few remaining open questions is whether any Democrats from red states where Trump is popular will side with the GOP majority on acquittal, which would allow the president to claim a bipartisan “exoneration.”Democratic Sen. Doug Jones of Alabama announced he would vote to convict Trump on both articles of impeachment Wednesday morning.”After many sleepless nights, I have reluctantly concluded that the evidence is sufficient to convict the President for both abuse of power and obstruction of Congress,” he said in a statement and then elaborated in a floor speech. “I will not shrink from my duty to defend the Constitution and do impartial justice,” he said.Democratic leaders have argued that, because the Senate voted again their demands for witnesses and other evidence, that the trial was not “real” and therefore an acquittal vote is meaningless.Senators on Wednesday were continuing to make floor speeches explaining how and why they intended to vote, but Kyrsten Sinema had yet to be heard from.Democrat Joe Manchin of West Virginia, was asked by reporters whether he would say more before the vote after proposing Monday that his fellow senators consider censuring Trump instead of convicting him, but his idea has gained little, if any, support in the GOP-controlled Senate.But he brushed off reporters’ attempts to learn how he’ll vote on acquittal, telling them they would “find out at 4 p.m. today.”He said he hasn’t let anyone in leadership know how he’ll vote and criticized reporters for asking. “Do you know where I’m from?” he asked one reporter.“It’s a very big decision. It’s a very serious decision. I’ve taken it very, very seriously,” he said.“I agonized. It’s been very difficult for me. “I feel very strong about the decision I will make. It’s going to be a very, very personal decision. It’s very difficult.”Utah Republican Mitt Romney is set to speak at 2 p.m. and will be watched to see if he joins fellow Republicans Lisa Murkowski of Alaska and Susan Collins of Maine in calling for Trump’s acquittal — even after raising questions about Trump’s conduct — but also slamming the House impeachment drive as rushed and the Senate’s handling of the trial, including its rejection of witnesses.”I do not believe that the House has met its burden of showing that the president’s conduct, however flawed, warrants the extreme step of immediate removal from office, nor does the record support the assertion by the House managers that the president must not remain in office one moment longer,” Collins said in her Senate floor speech.But while she has said his conduct was “wrong” Trump has continued to insist that his July 25 phone call with Ukraine’s president pressuring Ukraine to investigate the Bidens was “perfect” and that not only has he done nothing wrong, but instead was legitimately fighting corruption.Sen. Lamar Alexander of Tennessee another Republican Democrats had pinned their hopes on, announced on the Senate floor Wednesday morning that he, too, would vote to acquit the president, saying he can’t be removed from office “simply for actions that are inappropriate” and that it should be up to the people to decide in the next election.Minority Leader Chuck Schumer will take the floor just before the vote and can be expected to argue, as he’s done repeatedly, that the Senate will rue the day it failed, in his view, to hold Trump accountable for his pressure campaign against Ukraine to get an investigation of the Bidens for his personal political benefit.Majority Leader Mitch McConnell will be the last to speak before the vote.”We must vote to reject the House abuse of power, vote to protect our institutions, vote to reject new precedents that would reduce the framers’ design to rubble. Vote to keep factional fever from boiling over and scorching our republic. I urge every one of our colleagues to cast the vote on the common good clearly required, vote to acquit the president of these charges,” he said Tuesday.Once Chief Justice John Roberts announces the vote, the impeachment trial will end, going down in history as the shortest ever.Copyright © 2020, ABC Audio. All rights reserved.