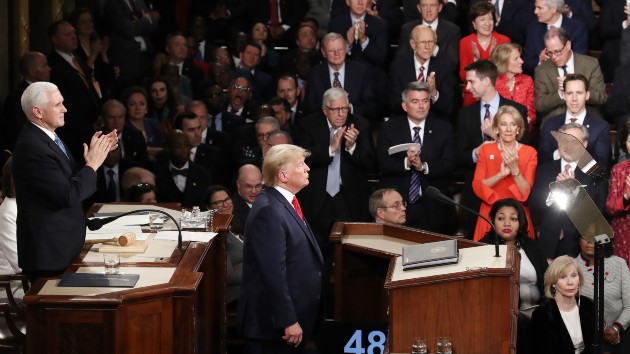 Drew Angerer/Getty Images(WASHINGTON) — In an image emblematic of American politics, President Donald Trump’s State of the Union address was met with raucous support from Republicans and mostly glares from Democrats.Even before Trump began his speech at the Capitol on Tuesday night, a chorus of Republicans could be heard chanting “Four more years,” while Democrats mostly stayed silent.In his opening remarks, Trump detailed what he called the “great American comeback.””Tonight, I stand before you to share the incredible results. Jobs are booming. Incomes are soaring. Poverty is plummeting. Crime is falling. Confidence is surging and our country is thriving and highly respected again,” Trump said. “America’s enemies are on the run. America’s fortunes are on the rise. And America’s future is blazing bright. The years of economic decay are over.”The remark was met with whooping chants from the mainly Republican side of the room, while Democrats were mainly unmoved.Other moments that illustrated the divide among lawmakers included when Trump spoke about abortion, the Second Amendment and immigration, and when he said America was “the most exceptional republic ever to exist in all of human history. And we are making it greater than ever before.”The few moments that drew widespread applause from both Republicans and Democrats included Trump’s declaration that AIDS would be eradicated in America by the end of this decade, his talk of ensuring that every citizen in the country has access to high-speed internet, especially in rural America, and the killing of ISIS leader Abu Bakr al-Baghdadi.