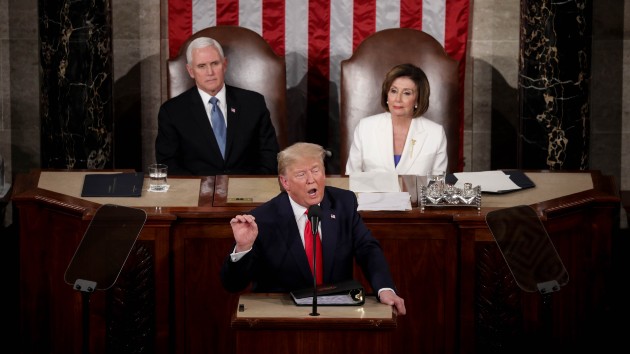 Yasin Ozturk/Anadolu Agency via Getty Images(WASHINGTON) — President Donald Trump delivered a reelection pitch during Tuesday night’s State of the Union address to Congress, less than two months after he was impeached in the same House chamber and a day before the Senate is expected to acquit him.While Trump eschewed any direct reference to the months-long impeachment process, a highly partisan atmosphere reigned as the producer-in-chief engineered some made-for-TV surprises. Here are five key takeaways from the speech:

1. Trump ignores cloud of impeachment, but disunity on displayThe president did not mention impeachment or investigations into his administration, which he frequently calls “witch hunts” and “hoaxes.”But the division in the House chamber was palpable as Trump ticked through a litany of partisan accomplishments and measures.Even before he began his remarks, Trump ignored an outstretched hand from House Speaker Nancy Pelosi.Sitting behind him during the address, Pelosi made her disapproval clear, such as when she rolled her eyes and clutched her chest as the president remarked, “We lift our voices in prayer.”As soon as Trump finished, she physically tore up a copy of the speech, eliciting criticism from the White House.Throughout Trump’s remarks, Democratic attendees at times stood in protest and groaned audibly. At least two exited as he spoke.Democratic lawmakers said afterward it felt like they had attended a Trump campaign rally, complete with their Republican counterparts chanting “four more years.””It was such a dirty speech,” Pelosi told reporters, saying that ripping up his remarks “was a courteous thing to do considering the alternative.”

2. Producer-in-chief brings reality TV to CongressTrump’s previous life as a television producer was on full display.He introduced the wife of a U.S. service member serving in Afghanistan, a guest of his sitting in the first lady’s box, with Trump adding she hadn’t seen her husband in seven months.Then — to their apparent surprise — the president called out the Army sergeant in a made-for-TV reunion, with tears of joy on display for millions of viewers.Trump also invited conservative radio host Rush Limbaugh, recently diagnosed with advanced lung cancer, to stand as first lady Melania Trump placed a Presidential Medal of Freedom around his neck. Democrats remained seated as the conservative host, who’s been widely criticized for racist and sexist remarks, received the high honor.Trump also announced on live TV that a fourth grade girl, another of his guests, was going to receive a scholarship that would allow her to attend a school of her choosing.

3. Trump tried to paint Democrats as socialistsTrump’s reelection campaign has included attempting to paint Democratic presidential candidates as socialists, and Trump brought that rhetoric into the House chamber by discussing how some of them support eliminating private health insurance.”Lawmakers in this room have endorsed legislation to impose a socialist takeover of our health care system, wiping out the private health insurance plans of 180 million very happy Americans,” Trump said. “To those watching at home tonight, I want you to know, we will never let socialism destroy American health care.”Trump promised to “always protect patients with preexisting conditions” even as his administration supports a lawsuit that would overturn Obamacare and eliminate, without a replacement plan at the ready, protections for tens of millions.When he spoke about prescription drug pricing, Trump told members of Congress to “get a bill on my desk, and I will sign it into law immediately.” Some Democrats stood, held up three fingers and chanted “H.R. 3” — a reference to a bill the House passed to lower drug costs that the Republican-controlled Senate has yet to take up.Trump also stepped on the third rail of abortion with a highly charged line in which he said members of Congress should “pass legislation finally banning the late-term abortion of babies.”Labeling fetuses “babies” was sure to prove controversial, as was the line’s incendiary allusion to his frequent, false claim at campaign rallies that Democrats support “ripping babies straight from the mother’s womb right up until the moment of birth.”

4. Taking credit for a ‘blue-collar boom’Trump’s address focused heavily on the economy, a central tenet of his reelection pitch.”Jobs are booming,” Trump said. “Incomes are soaring. Poverty is plummeting. Crime is falling. Confidence is surging and our country is thriving and highly respected again.”The U.S. is in a record-setting 11th year of economic expansion, with unemployment at a 50-year low, the stock market up about 20% since last year and wages growing.But according to a key measure of economic health, real GDP, the economy is growing at a rate slower than it was two years ago. Real GDP increased 2.3% in 2019 compared with 2.9% in 2018 — far lower than the 4% growth Trump promised as a candidate in 2016.While Trump has received historically low approval ratings throughout his presidency, Americans have generally given him higher marks on the economy than they have for his overall job performance.

5. Broad policy proposals were lackingIn a divisive election year with little hope of bipartisan legislative progress, Trump’s vision for the future was largely lacking in broad policy proposals.He ticked through a litany of past accomplishments. He embraced a plan for expanding school choice that his education secretary pitched a year ago, called for increased access to family leave and expressed support for an infrastructure bill.But overall, the address served more as a summary of his first three years as president than a plan for the future.