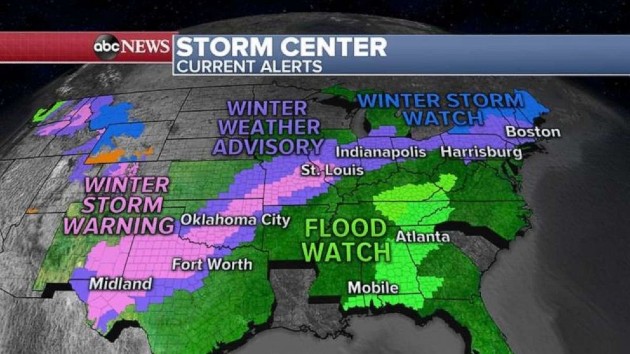 ABC News(NEW YORK) — A major storm system is moving through the heartland Wednesday with snow, ice, flooding, damaging winds and a few tornadoes.Already this storm brought up to 21 inches of snow in Colorado, 20 inches in Utah, 20 inches in Wyoming and up to 10 inches in western Texas. On Wednesday morning, ahead of the storm, 29 states from New Mexico to Maine are under snow, ice and flood alerts.The complex storm system stretches from Texas to the Northeast with snow already falling from Texas to Oklahoma, including Oklahoma City, where a winter storm warning has been issued.Heavy rain and a few thunderstorms are already firing up across the South, and some of the rain and icy mix is already reaching the Northeast.Wednesday afternoon and evening, the main area of low pressure begins to move north and east with severe storms expected to ignite along the Gulf Coast from New Orleans to Birmingham, Alabama and down to Panama City, Florida. These storms could produce damaging winds and a few tornadoes.To the north and west, snow and ice will break out from St. Louis to Chicago and into Detroit, where some areas could see 3-6 inches of snow.Later Wednesday night, ice and snow will move into the Northeast with a winter storm watch posted for New England and a winter weather advisory posted for most of the Northeast. Locally a glaze of ice is expected from Pennsylvania to Massachusetts, and more than a foot of snow is expected in northern New England.On Thursday, the storm moves north and east with severe storms moving into the Carolinas and Florida, where damaging winds will be the biggest threat — with possibly a few tornadoes as well.To the north, heavy snow continues in northern New York state and into northern New England.Along the Northeast coast, mostly rain is expected from Washington, D.C. to New York City, with an icy mix in Boston changing to rain early Thursday.By Friday, the center of the storm finally lifts into the Northeast, with ice and snow continuing in northern New England and heavy rain along the coast.Some areas in the Northeast could see some minor flooding due to the heavy rain Thursday night into Friday morning.By Friday late afternoon and early evening, the cold front finally clears the Northeast from rain and snow, then chilly, gusty northwest winds will follow with some lake effect snow showers in Western Pennsylvania and New York. Copyright © 2020, ABC Audio. All rights reserved.