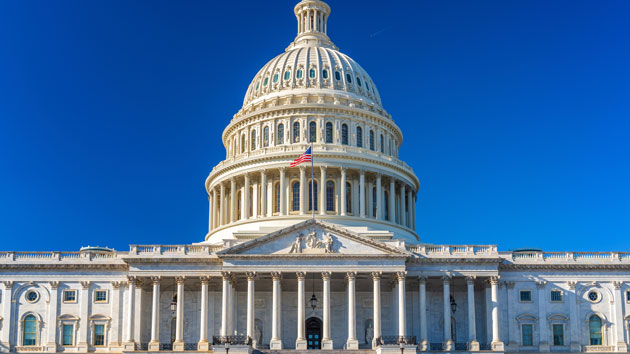 sborisov/iStock(WASHINGTON) — The months-long impeachment and Senate trial of President Donald Trump came down to an anticlimactic end Wednesday afternoon with acquittal on the first article.But there was drama on the Senate floor when each senator’s name was called, and standing at their desks, they pronounced Trump “guilty” or “not guilty” as required by Senate rules on each of the two articles alleging “abuse of power” and “obstruction of Congress.”The Constitution requires “[N]o Person shall be convicted without the Concurrence of two-thirds of the Members present.”Trump is only the third president in U.S. history to face an impeachment trial, but largely because Republicans have a 53-47 advantage in the Senate, his fate has been mostly a foregone conclusion since even before the proceedings began.Earlier Wednesday, in a dramatic moment on the Senate floor, Utah Republican Mitt Romney announced he would vote to convict Trump, the first to break ranks with his party and the first senator ever to say he would find a president of his own party guilty.Here is how developments are unfolding. Please refresh for updates.

4:49 p.m. Trump tweets video after Senate acquittalPresident Trump’s first post-vote tweet was a video – which he has shared previously – depicting him with yard signs showing him being president “4EVA.”

— ABC News’ Ben Gittleson at the White House4:41 p.m. Roberts gavels Senate out as court of impeachmentThe chief justice, thanks the Senate for making him feel welcome and helping him conduct his role as presiding officer.”I would like to begin by thanking the Majority Leader and the Democratic Leader for their support as I attempted to carry out ill-defined responsibilities in an unfamiliar setting,” Roberts says. “They ensured that I had the wise counsel of the Senate itself through its secretary and her legislative staff. I am especially grateful to the parliamentarian and her deputy for their unfailing patience and keen insight. I am likewise grateful to the Sergeant at Arms and his staff for the assistance and many courtesies that they extended during my period of required residency. And thank you all for making my presence here as comfortable as possible..”As I depart the chamber, I do so with an invitation to visit the court. By long tradition and in memory of the 135 years we sat in this building, we keep the front row of the gallery in our courtroom open for members of Congress who might want to drop by to see an argument — or to escape one. I also depart with sincere good wishes as we carry out our common commitment to the constitution through the distinct roles assigned to us by that charter. You have been generous hosts, and I look forward to seeing you again under happier circumstances.”Roberts then gavels the Senate, as a court of impeachment, to a close, ending the shortest presidential impeachment trial ever.4:32 p.m. Senate acquits Trump on second article of impeachmentThe Senate votes to acquit Trump on the second article of impeachment — obstruction of Congress — by a vote of 53-47.Chief Justice Roberts announces the vote from the dais, “On this article of impeachment, 47 senators have pronounced Donald John Trump, President of the United States, guilty as charged. 53 senators have announced him not guilty as charged. Two-thirds of the senators present not having pronounced him guilty, the Senate of judges that respondent Donald John Trump, president of the United States, is not guilty as charged in the second article of impeachment,” Justice Roberts says.”It is, therefore, ordered and adjudged that the said Donald John Trump be and he is here by acquitted of the charges in said articles.”He then prepares to gavel the Senate, sitting as a court of impeachment, to a historic close.