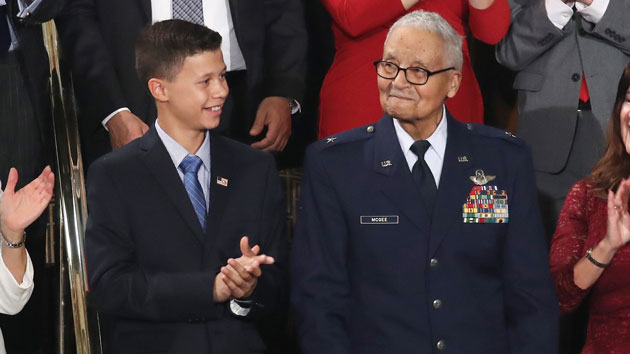 Drew Angerer/Getty Images(WASHINGTON)  — Tuskegee Airman Charles McGee was honored by NASA during their Black History Month program hours after being acknowledged by President Donald Trump at his State of the Union address on Tuesday night.”Incredible story,” Trump said Tuesday. “After more than 130 combat missions in World War II, he came back home to a country still struggling for civil rights and went on to serve America in Korea and Vietnam.”Ahead of the address on Capitol Hill, Trump signed a bill promoting McGee to brigadier general and pinned the stars on his shoulders in the Oval Office.In his storied career, McGee flew a record 409 combat missions. During World War II, McGee escorted bombers over Germany, Austria, and the Balkans. During the Korean and Vietnam Wars, McGee participated in 100 interdiction missions and 173 reconnaissance missions.On Wednesday, McGee was interviewed by astronaut Alvin Drew about his career, education and his early memories of flying. McGee closed his portion of the event by challenging his audience to give back to the next generation.

Despite facing obstacles of racism in Brig. Gen. Charles McGee's early years, "that didn't deter from my training." Alvin Drew of @NASA_Astronauts sits down with the trailblazer to discuss his legacy as an 100-year-old Tuskegee Airman. Watch: https://t.co/4itEoKv9ic pic.twitter.com/zWVW3c40ww

“Are you mentoring a youngster coming along behind you? Whether it’s in your family, neighborhood or city, there are youngsters needing that. If you don’t have a mentor, somewhere in your neighborhood there is one. Don’t overlook that because those young folks are the future.”McGee is currently a mentor to his great-grandson Iain Lanphier, who sat next to him at the Capitol during the State of the Union address.Inspired by the Tuskegee Airman, Lanphier hopes to do great things like his great-grandfather and the president said that he hopes to attend the Air Force Academy and eventually travel into space.”He has his eye on the Space Force,” Trump said Tuesday, referencing the new sixth branch of the U.S. military. “As Iain says, most people look up at space, I want to look down on the world.” Copyright © 2020, ABC Audio. All rights reserved.