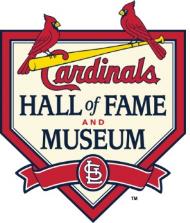 For Immediate Release from the St. Louis Cardinals:

The seven modern ballot nominees were selected by a Red Ribbon committee of Cardinals baseball experts through a secret ballot process.  Fans can view the Cardinals Hall of Fame ballot at cardinals.com/HOF and cast their selections online starting Sunday, March 1.  The two players with the most fan votes after voting concludes on Friday, April 17, will be selected for induction into the Cardinals Hall of Fame this August.

“Each year, we look forward to celebrating and honoring our team’s history by inducting a new class into the Cardinals Hall of Fame,” said Bill DeWitt Jr., Chairman and CEO of the St. Louis Cardinals.  “I would like to thank the Red Ribbon committee for nominating these seven accomplished players for the modern ballot.”

The St. Louis Cardinals Hall of Fame was established to recognize the exceptional careers and significant achievements of the greatest players in Cardinals history.  To be eligible, the nominees must have played for the Cardinals for at least three seasons and be retired as a player from Major League Baseball for at least three years.  The eligible pool of players is divided into two categories, including “modern players” and “veteran players.”  If a player retired more than 40 years prior to the induction year, he is classified as a veteran player.

In addition to nominating modern players for fan balloting, the Red Ribbon committee of Cardinals baseball experts also elected a veteran player for induction using a secret ballot process.  Independent of this process, the Cardinals organization may also opt to induct an individual who was an important figure in Cardinals history such as a coach, broadcaster or member of the front office.

Following is a description of each Hall of Fame nominee’s career as a Cardinal:

After reaching the big leagues as 20-year old, “Lefty” became a three-time All-Star during his seven seasons in St. Louis.  He won 14 games as a starter for the 1967 World Series championship team, and followed up with 13 wins the following season as the organization claimed its second consecutive pennant.  Carlton finished second in MLB with a 2.17 ERA in 1969 and was a 20-game winner in 1971.

Keith Hernandez played 10 seasons with the Cardinals, winning six straight Gold Gloves from 1978-1983 at first base.  He was a National League co-MVP in 1979, batting a league leading .344 with 48 doubles, 11 home runs and 105 RBI.  The two-time All-Star was a member of the 1982 World Championship team and batted .299 that season with 94 RBI.  Hernandez’s .385 on-base percentage ranks fifth all-time among Cardinals hitters to have played at least 10 seasons with the club.

Making his debut the same night Lou Brock clubbed his 3,000th career hit, Tom Herr made his mark on one of the most popular eras of Cardinals baseball.  He led the National League in both fielding percentage and assists as a second baseman in 1981 and finished in the top-three in double plays turned in six of his 10 seasons in St. Louis.  Herr’s finest offensive season came in 1985 when he was named to the All-Star team and finished fifth in NL MVP voting after finishing in the league’s top-ten in on-base percentage, batting average, hits, doubles, runs batted in and walks.  That season he had 110 RBI and only eight home runs, making him the last player in NL history to reach 100+ RBI with less than 10 HR.

A first-round draft pick, Matt Morris made his Major League debut less than two years after being taken 12th overall in the 1995 amateur draft.  In his 1997 rookie season, Morris made 33 starts and finished with a 12-9 record and a 3.19 ERA, tying him for second among Rookie of the Year balloting.  A National League All-Star in 2001 and 2002, Morris finished third in Cy Young voting in 2001 after winning a Major League-best 22 games.  In his eight seasons with the club, Morris recorded at least 11 wins six times, won four division titles and started 11 postseason games.  Matt’s 986 strikeouts ranks sixth on the team’s all-time list and his .620 winning percentage is seventh-best in club history.

Edgar Renteria played six seasons with the Cardinals and was named a National League All-Star three times (2000, 2003, 2004).  The Colombian shortstop won two Gold Gloves while with St. Louis in 2002 and 2003, and three Silver Slugger Awards in 2000, 2002 and 2003.  Renteria batted .330 in 2003, a franchise single-season record for a shortstop, as are the 47 doubles he hit that season.  His career high 100 RBI in 2003 ranks second among all St. Louis shortstops for a single season. Renteria’s 37 stolen bases his first season with the Cardinals are the most in a single-season since that time and his 148 steals while with St. Louis rank second in franchise history among shortstops.

Known as one of the most feared closers in baseball history, Lee Smith recorded at least 43 saves in three of his four seasons with the Cardinals, leading the league in 1991 and 1992.  During his Cardinals career, Smith earned three All-Star selections and finished in the top-four of Cy Young voting twice.  His 160 saves stood as a club record until Jason Isringhausen surpassed that total in 2007.

During his five seasons in a Cardinals uniform, John Tudor accumulated a .705 winning percentage and 2.52 ERA over 125 starts, both of which still stand as all-time Cardinals records (minimum 750.0 IP).  The left-hander’s finest season came in 1985 when he won 21 games (went 20-1 after June 1) with a miniscule 1.93 ERA, including 10 complete game shutouts, and finished second in National League Cy Young voting.  A member of two National League pennant winning teams in 1985 and 1987, Tudor won at least 10 games in each of the four full seasons he pitched for the Redbirds.

Cardinals Hall of Fame and Museum

The 8,000-square-foot St. Louis Cardinals Hall of Fame and Museum on the second floor of Cardinals Nation in Ballpark Village celebrates the rich history of baseball in St. Louis and the legacy of one of baseball’s most storied franchises.  Since its creation in 2014, the Cardinals Hall of Fame, presented by Edward Jones, has inducted 40 former Cardinal players, coaches and executives.  The Cardinals’ museum collection is the largest team-held collection in baseball and is second only to the National Baseball Hall of Fame in terms of size with over 22,000 memorabilia items and hundreds of thousands of archived photos.  Fans can learn more about the museum at cardinals.com/museum.  #CardsMuseum