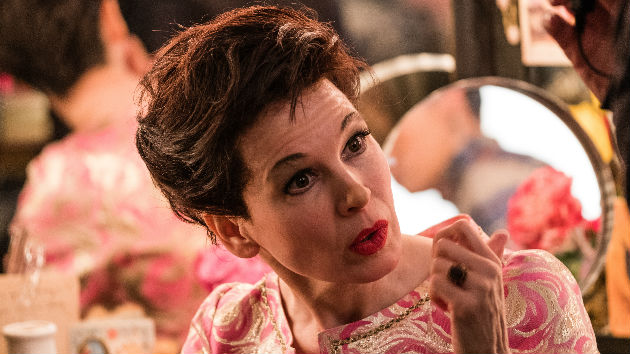 Roadside Attractions/LD Entertainment(LOS ANGELES) — The musician biopic is something of an industry standard, with the life stories of legends like Ray Charles, Buddy Holly, Johnny Cash and, more recently, Freddie Mercury and Elton John having been immortalized on celluloid.

These movies often lead to Oscars gold — and fter crunching the numbers, The Los Angeles Times discovered that Renee Zellweger has a good shot to take a bow at the Oscars this Sunday night, for her portrayal of Judy Garland in Judy.

There have been around 30 film acting performances centered on real-life musicians, the paper noted, adding the caveat that that includes actors who weren’t shown singing or playing onscreen, as Zellweger did.

Of those biopics, 11 were awarded Academy Awards for their lead performances.  Out of those, four of the actors who did their own singing onscreen, as Zellweger did, took home the trophy.

Other stars who sang and won on Oscar night included James Cagney in Yankee Doodle Dandy, Barbra Streisand for Funny Girl, Sissy Spacek in Coal Miner’s Daughter, and Reese Witherspoon, when playing June Carter Cash in the Johnny Cash biopic Walk the Line.  Based on this, Zellweger’s chances for a win look good.

Then again, although Rami Malek lip-synced for Freddie Mercury in Bohemian Rhapsody and still won the Best Actor Oscar in 2019, Taron Egerton did his own singing when portraying Elton John in Rocketman, and found himself snubbed by the Oscars this year for his acclaimed efforts.

By the way, only one supporting actor Oscar was earned for a musical biopic: Mahershala Ali, for his portrayal of pianist Don Shirley, in last year’s Best Picture winner, Green Book.