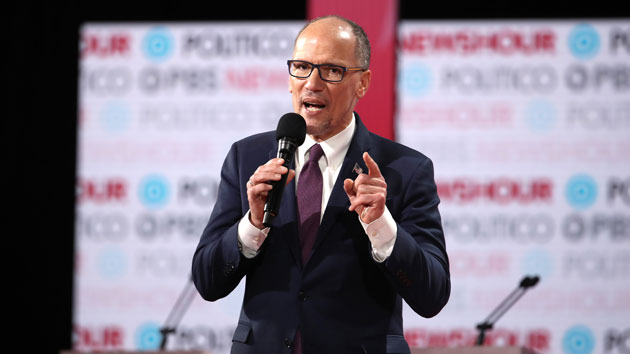 Justin Sullivan/Getty Images(WASHINGTON) — Democratic National Committee Chairman Tom Perez Thursday afternoon called for re-canvassing of the Iowa caucuses after continued reports of errors and inconsistencies in the results, potentially further delaying final results from the state and just ahead of the New Hampshire primary.”Enough is enough. In light of the problems that have emerged in the implementation of the delegate selection plan and in order to assure public confidence in the results, I am calling on the Iowa Democratic Party to immediately begin a recanvass,” Perez tweeted.

Enough is enough. In light of the problems that have emerged in the implementation of the delegate selection plan and in order to assure public confidence in the results, I am calling on the Iowa Democratic Party to immediately begin a recanvass.

The Iowa Democratic Party released more caucus results early Thursday morning, more than two days after polls closed following a problem-plagued night of voting.With 97% of precincts reporting, former South Bend, Indiana, Mayor Pete Buttigieg and Vermont Sen. Bernie Sanders both had 26% of the vote, according to the Iowa Democratic Party. Massachusetts Sen. Elizabeth Warren had 18%, former Vice President Joe Biden had 16% and Minnesota Sen. Amy Klobuchar had 12% of the vote.Iowa’s caucusgoers were without results late Monday night and much of Tuesday after technical issues and confusion on the ground upended the vaunted caucuses. The ensuing chaos cast a pall over what has traditionally been a high spirited start to the Democratic primary season and raised questions about the impact of the Hawkeye State’s first-in-the-nation status going forward.Absent full results, none of the candidates who crisscrossed Iowa leading up to the caucuses, making nearly 400 stops collectively, with more than 330 days spent in the Hawkeye State while holding more than 2,300 events and spending millions of dollars in ads and on campaign events, saw a return on their investment by having their “moment.”Further, the problems that plagued Monday night’s caucuses raised for both the campaigns and voters serious concerns about the accuracy of counting highly-sought after delegates whose role is important in counting toward the number of pledged delegates needed to win the nomination at the Democratic National Convention. The total number of pledged delegates needed to win the nomination and become the presumptive nominee is 1,991.Polk County Democrats Chairman Sean Bagniewski later confirmed to ABC News that the DNC had been calling precinct chairs and asking for results — meaning the national party committee is actively engaging in calling the leaders of each precinct in order to verify the results.And one Democratic official was told that the DNC was “taking over” the accounting. The official said that to their knowledge, this has never happened before.Ahead of that results release, Carl Voss, a precinct chairman for Des Moines-55, said while attempting to drop off his precinct packet that he’d been contacted by the Democratic National Committee.”They wanted a copy of my math sheet,” he said.Voss said he didn’t know why they wanted his math sheet or if it was standard procedure. This was only Voss’ second time as a caucus precinct chair and said he wasn’t asked for this the first time.Math sheets are included in the precinct packets that every chair received from the Iowa Democratic Party. In addition to the math sheets, presidential preference cards, county candidate petitions, and summary of results forms for delegates and alternatives are in the packet.He added that while using the reporting app, they reported an overcount of participants and weren’t unable to go back and revise the numbers.In a follow up tweet on Monday, Perez stressed that the recanvass would involve those very types of worksheets.”A recanvass is a review of the worksheets from each caucus site to ensure accuracy,” Perez tweeted. ” The IDP will continue to report results.” Copyright © 2020, ABC Audio. All rights reserved.