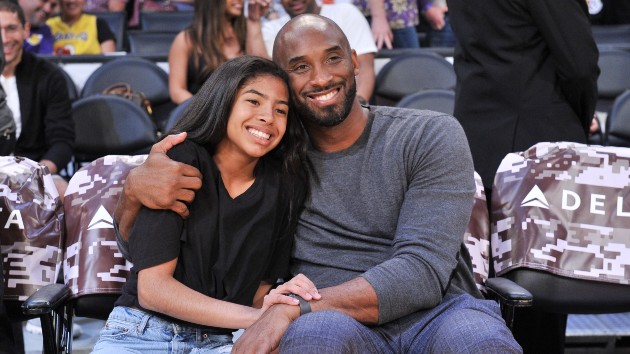 Allen Berezovsky/Getty Images(LOS ANGELES) — The No. 2 jersey of Gianna Bryant, the 13-year-old daughter of NBA legend Kobe Bryant who died along with him and seven others in a helicopter crash last month, has been retired. Gianna’s mom, Vanessa Bryant, posted several tributes to her daughter on Instagram and shared vidoes of the retirement ceremony at Harbor Day School in Corona Del Mar, California, the private school that Gianna attended.”My Gianna. God I miss you. I’ve been so lucky to have woken up to see your gorgeous face and amazing smile for 13 years,” Vanessa Bryant wrote in one post. “Wish it would’ve been until my last breath. Mommy loves you to the moon and back. Infinity plus 1. #2 #Mambacita #GigiBryant” “My Gigi. I love you! I miss you. You’ve taught us all that no act of kindness is ever too small. Mommy is still and will ALWAYS be so proud of you mamacita,” she wrote in another post that showed Gigi’s No. 2 jersey displayed in a frame on her school’s basketball court.Gianna was a basketball standout who was following in the footsteps of her dad, who retired in 2016 after a 20-year career and five NBA Championships with the Los Angeles Lakers. The 13-year-old, known as Gigi, earned the nickname “Mambacita” because of her tenacity on the basketball court, like her famous dad whose nickname was “Mamba.”The father and daughter were on their way to a basketball game at Kobe Bryant’s Mamba Sports Academy in Thousand Oaks, California, on Jan. 26 when their helicopter crashed on a hillside in Calabasas, California. The Bryants, six other passengers — including two of Gianna’s teammates — and the helicopter pilot were all killed in the crash. One of the other passengers, Christina Mauser, assisted Kobe Bryant in coaching Gigi’s Mamba team and was also a former teacher, coach and parent at Harbor Day School.The school’s jersey retirement ceremony for Gianna featured remembrances from her coaches, teachers and teammates, including members of her eighth grade basketball team.Gianna’s former Harbor Day basketball coach described her as “a warrior who gave 110% every time she stepped on the court” and “one of the fiercest competitors” he’s seen in his 20-year coaching career. “She had that Mamba mentality,” the coach said in a video shared by Vanessa Bryant. “No matter who we were playing, she was going to force her will and help us find a way to win.”In another video, Gianna’s former literature teacher described the “wonder and joy that Gianna brought to our lives.” He said he and Gianna’s classmates compiled a collection of 44 stories about Gigi because at Harbor Day she was “more than Mambacita or heir to a basketball birthright, she was more than a sister or daughter.”Gianna’s music teacher spoke of her late student as “our example.” “When we take roll, we call her name and I hear 40-plus kids say ‘here’ in honor of her because she is always with us,” said the teacher. “Let’s be better because of her. She was our example. Let’s be better on the playground. Let’s be better to your neighbors, to your friends, to your moms, to your dads, because she set a beautiful example.” Gianna is survived by her mom and three sisters.Vanessa Bryant also shared a tribute Wednesday to Kobe Bryant, her husband of nearly 20 years. “#mybestfriend #theBestdaddy Miss you so much. #handsome #sweet #funny #silly #lovinghusband ❤️Miss you saying, “Bonjourno principessa/reina,” she captioned a photo of a smiling Kobe.Kobe Bryant started coaching Gianna’s basketball team when he retired in 2016. Gianna reportedly wanted to attend the University of Connecticut, and even got a chance to meet with the school’s women’s basketball team when they made a visit to Los Angeles in 2017. The team paid tribute to Gianna at a game last month, writing on social media, “Mambacita is forever a Husky.”Kobe Bryant has been described as a proud dad who would talk about how Gianna had the talent to take on his basketball legacy.”The best thing that happens is when we go out and fans will come up to me, and she’ll be standing next to me. And they’ll be like, ‘Hey, you gotta have a boy. You and V gotta have a boy, man, have somebody carry on your tradition, the legacy,"” Bryant told Jimmy Kimmel last year. “And she’s like, ‘Oy, I got this. You don’t need no boy for that. I got this.’ And I’m like, ‘That’s right. Yes, you do. You got this."”Music star Jay-Z recalled this week that one of the last things Kobe Bryant said to him was about Gianna. “He was last in my house on New Year’s,” Jay-Z said Tuesday during a lecture series at Columbia University. “And one of the last things he said to me was, ‘You gotta see Gianna play basketball.’” The Bryant family will continue to celebrate Gianna and Kobe thanks to the overwhelming tribute that grew at the Staples Center after their deaths, the president of the Staples Center told The Los Angeles Times.”Vanessa had reached out to us and said, ‘Our family would like the items out there.’ So we’re going to catalog every one of them,” Lee Zeidman told the news outlet. “By that I mean, T-shirts, letters, basketballs, stuffed animals, toys. We’re going to put those in specially made containers and we’re going to ship them to the family.” Copyright © 2020, ABC Audio. All rights reserved.