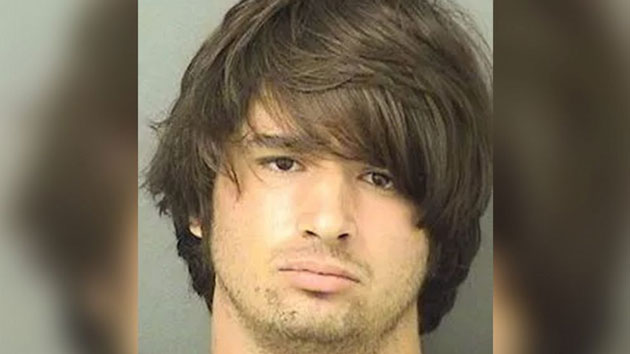 Boca Raton Police Services Department(BOCA RATON,Fla.) — A man covered in blood who was pulled over during an early morning routine traffic stop was later found to have allegedly murdered his father in a parking garage.It all started when police in Boca Raton, Florida, responded to a report of a deceased person, who appeared to have been stabbed to death, was found in a parking garage at about 7:30 a.m in the morning on Feb. 3.While on scene, Boca Raton police investigators received information from the Delray Police Department regarding an early morning traffic stop involving a 26-year-old man named Jared Noiman who was covered in blood when officers pulled him over. Noiman told authorities that he had been in an altercation.“Noiman was covered in blood and claimed to have been in an altercation in Boca Raton,” said the Boca Raton Police Services Department in a statement. “Noiman would not elaborate on who was involved in the altercation and did not wish to report a crime.”Police let Noiman go after the traffic stop but it was that information about Noiman, combined with surveillance footage from the crime scene, that led investigators to quickly identify the 26-year-old as a suspect in the murder of the man found in the parking garage.Later that same day, at approximately 5:45 p.m., Noiman was spotted driving by a Boca Raton police officer and another traffic stop was conducted. After a brief questioning Noiman was then arrested for driving without a valid driver’s license and he was taken by the Boca Raton Police Services Department.Noiman was interviewed at the police precinct and, according to authorities, remained a suspect in the stabbing investigation and was transported to the Palm Beach County Jail. However, because probable cause had not yet been established by the authorities to charge him with a crime related to the stabbing, he was released without being charged.Investigators got their break the next day when Noiman returned on his own recognizance to speak with the police again.“Noiman said he wanted to confess to the murder of his father, Jay Noiman,” Boca Raton police disclosed in their statement. “He said the two lived together out of his father’s vehicle and they slept in the parking garage … Noiman said he did not like the way his father treated him and he started having thoughts about killing him. Noiman continued his statement with a detailed description of how he stabbed his father and then strangled him while he was sleeping in the parking garage.”Noiman was then taken into custody again and charged with First Degree Murder in the death of his father. Copyright © 2020, ABC Audio. All rights reserved.