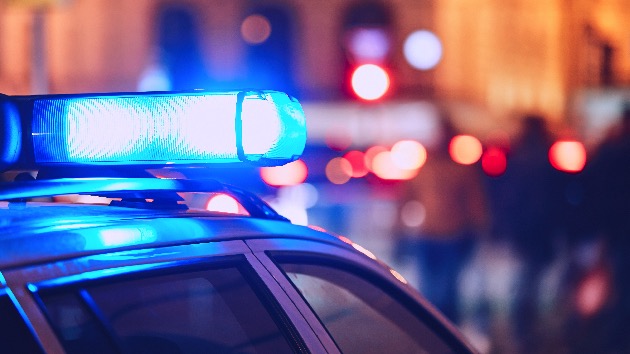 Chalabala/iStock(ANNE ARUNDEL COUNTY, Md.) — The search is on for a gunman who shot two Maryland detectives, and police are pleading with the suspect to surrender.Officers are going door-to-door Thursday morning and some schools are closed as the manhunt intensifies.In a message to the gunman, Anne Arundel County Police Chief Tim Altomare said Thursday, “Every minute you stretch this out, it makes it more dangerous for my cops, and thus it makes it more dangerous for you.””We need you to come and turn yourself in,” the chief said at a news conference. “End this lunacy before another person gets hurt.”

5:55 a.m., 2/6/20: Due to an ongoing police search for a shooting suspect, all schools in the Northeast cluster will be closed for students and staff today. All other schools will operate on normal hours.

The investigation began around 5 p.m. Wednesday when officers responded to a death investigation, said Anne Arundel County Police Sgt. Jacklyn Davis. They launched a homicide investigation and determined the victim’s car was missing, she said.By 11 p.m., Anne Arundel County detectives found the car in Baltimore and tried to initiate a traffic stop, but the suspect shot one of the detectives, Davis said.He was in “critical but stable condition” Thursday morning, she said.Another detective continued to chase the shooter, said Davis. The suspect shot multiple rounds at the second detective, hitting him, said Davis. He is in stable condition, she said.

Chief Altomare stressed his officers are seriously hurt but stable. They are here now at Shock Trauma in Baltimore. He said both detectives are @AACOPD veterans. @WMAR2News #GMM2 pic.twitter.com/2BlB4atdQu

They were identified as Detective Scott Ballard, a 22-year veteran assigned to the fugitive apprehension team, and Detective Ian Preece, a 13-year veteran assigned to the homeland security investigations team, the chief said.”Anybody in the community, look out your windows and if you see something or somebody in your yard, give us a call,” Davis told reporters. “He shot two of our guys — he’s armed, he’s dangerous, and we’re out looking for him.”

We are closely monitoring the ongoing investigation, and urge members of the public with any information to call the Anne Arundel Police Criminal Investigation Line at 410-222-3566. This individual is still at large and considered armed and dangerous.

“We have absolutely no tolerance for the violence committed against two Anne Arundel County Police detectives last night,” the governor continued. “These brave officers are now in stable condition, and all Marylanders are praying for their full and speedy recovery.”Copyright © 2020, ABC Audio. All rights reserved.