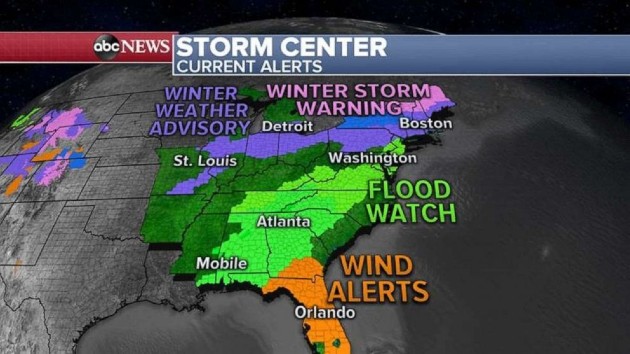 ABC News(NEW YORK) — Severe weather has left one dead in Alabama as more than six dozen damaging storms are reported in the South from Louisiana to Tennessee — including 12 reported tornadoes in Mississippi alone. Emergency Management Agency Director Kevin McKinney in Alabama’s Marengo County said that one person died and another was injured from storm damage early Thursday morning. McKinney also said that a couple of mobile homes were destroyed. On the cold side of the storm, up to 14 inches of snow fell in Texas, and up to a half a foot in Oklahoma. Several inches of snow were also reported from just south of Chicago to near Detroit Thursday morning.Thursday morning, as the storm moves east, 24 states from Mississippi to Maine are on alert for flooding, damaging winds, snow and ice. The storm is barreling through the South with severe storms that could produce tornadoes and damaging winds.Also Thursday morning, a tornado watch has been issued for Alabama, Florida and Georgia, with tornadoes and damaging winds possible. Further north, snow and freezing rain is falling in the Northeast from Pennsylvania to Maine.Thursday afternoon and evening, as the storm system moves further east, severe thunderstorms will erupt from Central Florida into the Carolinas. The biggest threat with these storms will be damaging winds near 70 mph and a few tornadoes once again. Also Thursday evening, flash flooding is expected ahead of the storm from Florida to New Jersey, as the heavy rain pushes to the East Coast.Friday morning, the heaviest of the rain and severe storms will finally move offshore, but an icy mix and snow will continue from the eastern Great Lakes to New England. The southern edge of the cold front will reach Miami and southern Florida on Friday morning, with strong to severe storms possible. By Friday evening, the storm finally pulls away from the East Coast with colder weather moving in for the Northeast and lake effect snow expected from Western Pennsylvania to Western New York. Copyright © 2020, ABC Audio. All rights reserved.