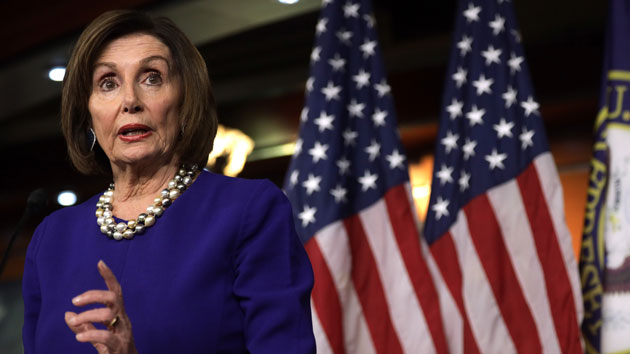 Alex Wong/Getty Images(WASHINGTON) — House Speaker Nancy Pelosi defended her decision to tear up President Donald Trump’s State of the Union address saying on Thursday that she did so to send a message to the American people that the speech was nothing more than “a manifesto of mistruths” with the president “using the Congress of the United States as a backdrop for a reality show.””I saw the compilation of falsehoods,” Pelosi told reporters at a press conference, saying, “I started to think, there has to be something that clearly indicates that this is not the truth. And he shredded the truth in his speech, shredded the Constitution in his conduct, so I shredded the ‘state of his mind’ address.”Pelosi added that her move had nothing to do with the president first refusing to shake her hand on Tuesday night when he took to the dais to deliver his address.The speaker said she felt “very liberated” by her unprecedented act of defiance, tearing up the president’s speech, though it has engendered bipartisan criticism, saying, “I have extended every possible courtesy. I’ve shown every level of respect. I tell my members all the time — there’s no such thing as eternal animosity. There are eternal friendships, but you never know, … everybody is a possible ally.”She also criticized his decision to award the Presidential Medal of Freedom — the country’s highest civilian honor – to conservative talk-show host Rush Limbaugh while in the House chamber Tuesday. She said Thursday that — at first — she thought his comments were about civil rights icon Rep. John Lewis, D-Ga., who is battling pancreatic cancer.”Do it in your own office. We don’t come to your office and do our business there,” Pelosi said while blasting Republicans for committing “a serious breach” of protocol by shouting in unison, “four more years!” in the chamber in support of Trump’s re-election.Earlier at the National Prayer Breakfast in Washington, Trump said he doesn’t like people who use their faith as justification for doing what they know is wrong, appearing to target Sen. Mitt Romney, the lone Republican who voted with Democrats, to convict Trump, after saying he was guided by faith.”Nor do I like people who say, I pray for you, when they know that that’s not so,” an apparent reference to Pelosi, sitting nearby, who has said she prays for Trump daily.And while the president questioned something the speaker repeatedly says — that she prays for him — Pelosi shot back, “I don’t know if the president understands prayer or people who do pray. … I pray very hard for him, because he’s so off the track.”Pelosi also praised Romney in her comments.”God bless him for his courage,” she said of the Utah senator.After a week in which her House impeachment managers failed to convince a two-thirds majority to remove the president from office for high crimes and misdemeanors, the speaker appeared to have very little appetite for continued investigations, but did not slam the door.”He’s impeached forever. You’re never getting rid of that scar,” the speaker said.But if there are other cases to make, she said, “We’ll make a judgement. … But we have no plans right now.” Copyright © 2020, ABC Audio. All rights reserved.