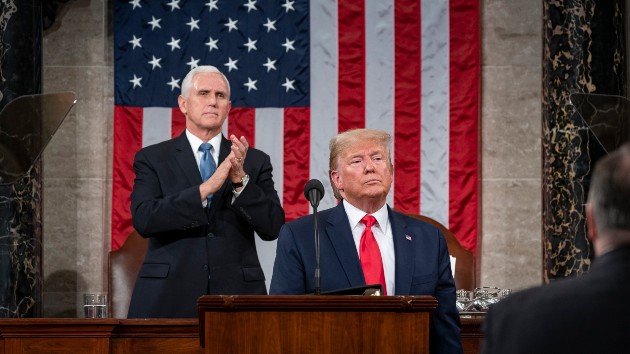 Official White House Photo by Shealah Craighead(WASHINGTON) — Reveling in the victory of his acquittal Thursday morning, President Donald Trump held up copies of newspapers with headlines of his acquittal and lashed out at his impeachment at the National Prayer Breakfast in Washington, D.C.After walking on stage to applause, the president proudly brandished a copy of the USA Today front page that said “ACQUITTED” in large font, to the cheers of some in the audience. He next held up the Washington Post, showing off its “TRUMP ACQUITTED” headline.When it was his turn to speak, Trump said he didn’t agree with the message of the keynote speaker that political opponents shouldn’t be treated as “enemies,” instead saying he and the country had been put through “a terrible ordeal” by “very dishonest people.” He appeared to target Utah Republican Mitt Romney, who voted to convict him saying he was guided by his faith. Trump blasted those who “use their faith as justification for doing what they know is wrong.” And he took a swipe at “people who say they pray for you,” an apparent reference to House Speaker Nancy Pelosi, sitting nearby, who has said she prays for Trump daily. The president is again sharing the stage with Pelosi, just two days after their contentious interactions at the president’s State of the Union Address that began with the president declining to shake Pelosi’s hand and ended with Pelosi tearing up a copy of the president’s address. In a hoarse voice, Trump said he would have even more to say when he speaks at the White House at noon. The National Prayer Breakfast is a non-partisan event, attended by members of both parties. Copyright © 2020, ABC Audio. All rights reserved.