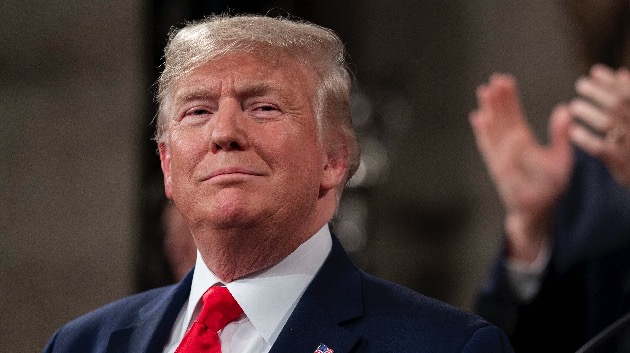 Official White House Photo by D. Myles Cullen(WASHINGTON) — President Donald Trump declared victory over impeachment at a rambling self-congratulatory White House event Thursday, carried live on national TV, calling the investigations into his presidency “evil” and Democrats “vicious as hell” as Republican allies laughed and applauded.”It was evil, it was corrupt, it was dirty cops, it was leakers and liars,” Trump said. His remarks, in the White House East Room, were meant to be a “celebration,” he said, after “we were treated unbelievably unfairly.””We went through hell, unfairly, did nothing wrong, did nothing wrong,” he said.In stark contrast with apologetic remarks President Bill Clinton made after his impeachment trial concluded in 1999, Trump offered no remorse or regret. He repeated his belief that he did nothing wrong.”It was all bull****,” Trump said.”This is what the end result is,” Trump said, holding up a copy of Thursday’s Washington Post with the banner headline “Trump acquitted.”

The official event in the White House East Room was entirely political in nature, reminiscent of a Trump campaign rally, with the president blasting specific Democratic lawmakers, thanking a long list of Republican allies on Capitol Hill — and reserving particular ire for Utah Republican Sen. Mitt Romney, the lone GOP senator to vote to remove Trump from office.He called Romney, who ran for president in 2012, “a failed presidential candidate,” saying, “things can happen when you fail so badly running.”He questioned the devout Mormon’s faith, which Romney cited on Wednesday as guiding his decision when he announced he would vote to convict Trump.”You have some who used religion as a crutch,” Trump said Thursday.

Trump in December became only the third president in U.S. history to be impeached, on abuse of power and obstruction of Congress. On Wednesday, the Senate acquitted him on both articles.

Pres. Trump: "Now we have that gorgeous word. I never thought a word would sound so good. It's called 'total acquittal.'" https://t.co/o4CMX8oHTg pic.twitter.com/bGm8qsnbPL

Occasionally referring to notes on his lectern, Trump lashed out at those who have investigated him during his time in office, from House Intelligence Chairman Adam Schiff to special counsel Robert Mueller.As he often does during his campaign rallies, he even harkened back to the 2016 election, criticizing his former Democratic opponent Hillary Clinton, and he took shots at former FBI Director James Comey.”Had I not fired James Comey, who was a disaster by the way, it’s possible I wouldn’t even be standing here right now,” Trump said. “We caught him in the act. Dirty cops. Bad people.”A multitude of Republican lawmakers sat in the audience, including Senate Majority Leader Mitch McConnell and House Minority Leader Kevin McCarthy. The vice president and a range of Cabinet secretaries watched as Trump spoke, as did members of the president’s defense team, who received a standing ovation when they entered the East Room.Speaking at the National Prayer Breakfast earlier Thursday, Trump rejected calls from the keynote speaker to “love your enemies.””So many people have been hurt, and we can’t let that go on,” the president said in a hoarse voice, “And I’ll be discussing that a little bit later at the White House.”That comment came just after he launched into an attack on his impeachment, saying he and the country had been put through “a terrible ordeal” by “very dishonest people.”“They have done everything possible to destroy us and by so doing, very badly hurt our nation,” he said.At the prayer breakfast — what is supposed to be an annual non-political events where politicians and others come together to pray — Trump appeared to target Romney.”I don’t like people who use their faith as justification for doing what they know is wrong,” Trump said.”Nor do I like people who say, I pray for you, when they know that that’s not so,” an apparent reference to House Speaker Nancy Pelosi, sitting nearby, who has said she prays for Trump daily.At the White House, Trump said he was, in fact, referring to Pelosi, whom he labeled a “horrible person.””I had Nancy Pelosi sitting four seats away,” Trump said. “I’m saying things a lot of people wouldn’t have said. I meant every word.””She may pray,” the president added,” but she prays for the opposite, but I doubt she prays at all.”As he did at the White House, when he entered the prayer breakfast, Trump brandished newspapers with banner headlines saying he had been acquitted.Romney aside, the president praised “courageous Republican politicians” who stood by him.“Weeks ago, and again yesterday, courageous Republican politicians and leaders had the wisdom, fortitude and strength to do what everyone knows was right,” he said.In an interview on Fox News Thursday morning, after the president spoke, White House press secretary Stephanie Grisham said the president was going “to talk about just how horribly he was treated” in the White House remarks.“Maybe people should pay,” she said.“The Democrats should be held accountable for not only what they did to the president and to his family but the country,” she said. “People need to understand what the Democrats did was dishonest and it was corrupt and it had no other motive than to take them out in 2020. People should be held accountable for anything they do to try to hurt this country on this president.”On Romney’s vote to convict, Grisham said she was “disappointed but sadly wasn’t surprised” and attacked him as a flip-flopper who is “bitter” that he’s not president.“If you put party aside, if you even put religion aside, I just had to wonder, was Mitt Romney even listening because if he was listening, he would not have voted that way,” Grisham said, insisting “the president did absolutely nothing wrong.”Asked whether the president could ever reconcile with Pelosi, Grisham said “he is going to try his hardest but that it is difficult when somebody has been out to try to ruin your reputation and your political career that’s going to be difficult to do.”Pelosi, at her weekly news conference Thursday, said Trump used his State of the Union address and Congress as “a reality show.”

Speaker Nancy Pelosi says that instead of giving a State of the Union address, Pres. Trump used "the Congress of the United States as a backdrop for a reality show, presenting a state of mind that had no contact with reality whatsoever." https://t.co/bSLhhXNx46 pic.twitter.com/UUyEU7fIOg

“They say there’s going to be payback for us — for honoring the Constitution,” she said, responding to a question about Grisham’s comments.”He’s impeached forever,” she said of Trump, “no matter what he says or what headlines he wants to carry around.””I don’t think the president understands about prayer or people who do pray,” she said.”He really needs our prayers.”Copyright © 2020, ABC Audio. All rights reserved.