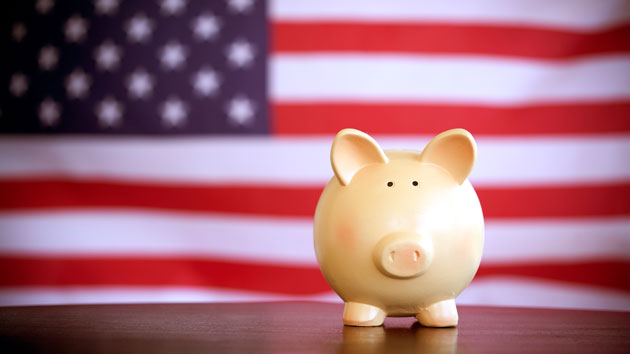 artpipi/iStock(WASHINGTON) — Another feud over campaign finance is brewing between Massachusetts Sen. Elizabeth Warren and former South Bend Mayor Pete Buttigieg — this time as the Warren campaign accuses a Buttigieg campaign official of skirting rules that prohibit coordination between candidate campaigns and outside groups.The latest turn in the tense back and forth between the two presidential candidates comes just ahead of ABC News’ 2020 Democratic primary debate on Friday and next week’s primary in that state potentially setting a stage for another campaign finance showdown.Wednesday afternoon, Roger Lau, the campaign manager for Warren, called out Buttigieg adviser Michael Halle for a tweet that seemed aimed at pro-veteran super PAC VoteVets, which endorsed Buttigieg in December.”Pete’s military experience and closing message from Iowa work everywhere especially in Nevada where it’s critical they see this on the air through the caucus,” Halle tweeted, signaling that the Indiana Democrat’s military service in Afghanistan and his closing argument in Iowa should be part of television advertisements in Nevada.Lau then responded: “Was this meant to be a DM or did you mean to tweet out this instruction to your super PAC? (Fun fact about how some campaigns exploit our broken campaign finance laws: if it was a DM it would be illegal.)”Lau seemed to be implying that Halle was deliberately operating in a grey area, pointing out that Halle legally can publicly tweet signals to VoteVets, but if he does it privately through a private message, it’s illegal — which is an often-criticized loophole in campaign finance laws. Lau implied that Halle was exploiting those “broken campaign finance laws.”The Buttigieg campaign did not answer ABC News’ question about what Halle was referring to in the tweet.Jon Soltz, chairmain of VoteVets. told ABC News that his organization is not coordinating ads with the Buttigieg campaign.“VoteVets PAC is running an independent expenditure campaign. We independently decide our ad strategy. We can not and do not coordinate our ads with the campaign in any way,” Soltz said in a statement.Under the Federal Election Commission’s laws, candidates and outside groups are banned from coordinating in their expenditures, but coordination done through publicly available information isn’t covered by the rules.Asked if the Buttigieg campaign had indeed spoken privately with a super PAC about the campaign, national press secretary Chris Meagher told ABC News, “No.””Pete is the only candidate who isn’t a millionaire or billionaire,” Meagher said. “And If the largest progressive veterans group wants to help spread the word about his service we welcome it. Veterans have been central to propelling our movement and they will be a central part of the coalition that Pete will bring together to defeat Donald trump.”The spat on Twitter between the Warren and Buttigieg campaigns comes as the 2020 Democratic primary field enters an increasingly aggressive television ad blitz from campaigns, as well as outside groups jockeying to support the candidates as early primary states begin casting their votes.And it echoes earlier divisions between the two campaigns also staked over campaign finance differences. In December, Warren went after Buttigieg for fundraising with “billionaires in wine caves,” sparking criticism from Buttigieg and his own donors who said they had previously held fundraisers for Warren.In this instance, though the Buttigieg campaign didn’t break any rules, campaign finance experts say the Buttigieg campaign is still pushing the boundaries and exploiting a loophole in the obscure campaign finance rules.Paul Ryan, vice president of policy and litigation at Washington-based watchdog group Common Cause, said if Halle’s tweet was instead a private message to an outside group, and the outside group made an ad buy based on the information in the private message, then the Buttigieg campaign and the outside spender’s activities would “arguably meet” the “material involvement” standard under the FEC’s multi-part test.This would violate federal laws.But in this case, because Halle had tweeted the message publicly instead of sending it as a private message to a super PAC, it’s not necessarily covered by the FEC rules.”In other words, if a candidate does all of their coordinating with outside groups in public view, there’s no illegal coordination under this FEC regulation,” Ryan said. “It’s a pretty big hole in the law.”But even if the information is from a publicly available source, super PAC ads that run “at the request or suggestion” of a campaign still could be considered coordinated expenditures, said Adav Noti, Campaign Legal Center’s senior director and former associate general counsel at the FEC.”And the fact that it’s on Twitter suggests it’s a calculated attempt to take advantage of the ‘publicly available’ exception — which savvy operatives know about and exploit – while failing to realize it doesn’t apply to this particular type of coordination,” Noti said.Campaign Legal Center’s federal reform director Brendan Fischer said the lines are not clear if the “request or suggestion of a campaign” standard overpowers the “publicly available source” exception.”Buttigieg’s campaign is pushing the envelope by making such an obvious and detailed request,” Fischer said. “At a minimum, this thinly-veiled message suggests that the Buttigieg campaign is inviting the support of big money outside groups like super PACs.”But one thing is clear at this point — with the current lack of quorum required for the FEC to vote on whether to act or not on substantial matter, there’s a slim chance of the agency taking up on this matter during the primaries.Copyright © 2020, ABC Audio. All rights reserved.