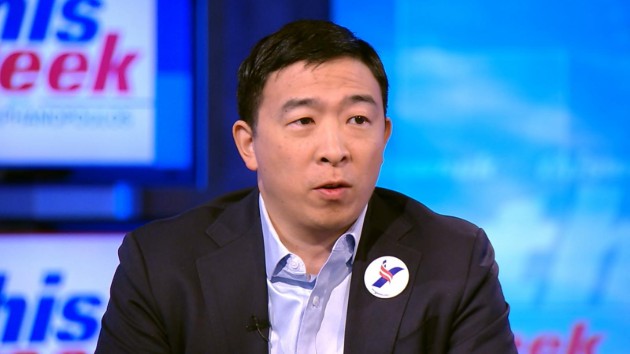 ABC News(DES MOINES, Iowa) —  Tech entrepreneur-turned-Democratic presidential candidate Andrew Yang has laid off a number of campaign staffers in Iowa, according to the campaign and at least one staffer who was laid off.The news of the Yang campaign layoffs came hours after Democratic National Committee Chairman Tom Perez called Thursday for re-canvassing of the Iowa caucuses after continued reports of errors and inconsistencies in the results, potentially further delaying final results from the state and just ahead of the New Hampshire primary.With 97% of precincts reporting, former South Bend, Indiana, Mayor Pete Buttigieg and Vermont Sen. Bernie Sanders both had 26% of the vote, according to the Iowa Democratic Party. Massachusetts Sen. Elizabeth Warren had 18%, former Vice President Joe Biden had 16% and Minnesota Sen. Amy Klobuchar had 12% of the vote.Yang had 1% of the vote.Campaign manager Zach Graumann said the layoffs have nothing to do with Yang’s performance in Iowa and were always planned to take place.”As part of our original plan following the Iowa caucuses, we are winding down our Iowa operations and restructuring to compete as the New Hampshire primary approaches,” Graumann said. “These actions are a natural evolution of the campaign post-Iowa, same as other campaigns have undertaken and Andrew Yang is going to keep fighting for the voices of the more than 400,000 supporters who have donated to the campaign and placed a stake in the future of our country.”Another staffer, who was not laid off, confirmed that some staffers received a call Wednesday and were told they would no longer be working for the campaign. News of the layoffs came as a surprise to some who were expecting to learn where they would be reassigned to work after the Iowa caucuses.”Some people were surprised — some people were expecting to go to New Hampshire,” the staffer said. “We knew what the Iowa polls were saying and we wanted to do better, but that didn’t happen. New Hampshire is where we’re stronger so hopefully we’ll do better there.” Copyright © 2020, ABC Audio. All rights reserved.