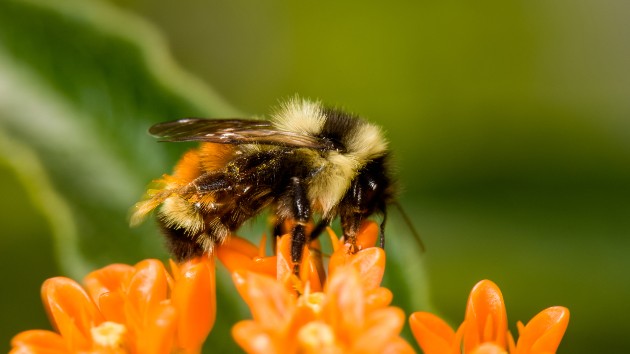 Paul Hartley/iStock(LONDON) — A new study has drawn a direct link between climate change and the global decline in the bumblebee populations, with scientists now warning that further declines can be expected as the planet continues to heat up. The study, jointly authored by Peter Soroye and Jeremy Kerr from the University of Ottawa, and Tim Newbold from University College London, found that recent climate change, which has increased global temperatures, “has driven stronger and more widespread bumblebee declines” than previously thought. The scientists used data over a 115-year time period to discover that survival rates of bumblebees in a given place has dropped by around a third.Long-term data analysis of 66 different species across North America and Europe revealed that the increasing frequency of hotter temperatures raises species’ risk of extinction locally and reduces the bumblebees’ chances of colonizing new areas. The team could see the change in bumblebee populations by simulating “climate chaos” scenarios and observing where bumblebees currently are in relation to where they used to be. “We found that populations were disappearing in areas where the temperatures had gotten hotter,” Soroye, the study’s lead author, said according to PA Media. “If declines continue at this pace, many of these species could vanish forever within a few decades.”The scientists have said that the study, published in the journal Science on Feb. 7, is the most compelling evidence yet that rising temperatures have caused the declining populations and that the global situation could deteriorate further. “This is the clearest fingerprint of climate change causing bumblebee declines so far, after a relatively small amount of climate change,” Newbold, one of the other authors, told ABC News. “With an acceleration of climate change in the future, we expect further steep declines.” As pollinators of wild flowers, the decline will have a significant impact on ecosystems around the world, and on the variety of human diets, he said.”The main thing we can do to try to reverse the declines is to reduce the rate of climate change,” Newbold said. “But we know there are also other measures that can benefit bumblebees, such as restoring natural habitats and planting wildflower-rich habitats.” The study comes a month after U.S. government data found that the last decade was the warmest in human history, with 2019 the 43rd year in a row that global temperatures were above the historical average. Copyright © 2020, ABC Audio. All rights reserved.

Is eco-vandalism an effective way to raise awareness about climate change? Experts weigh in.