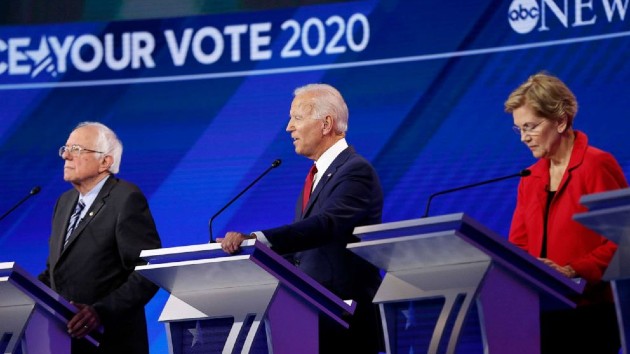 Heidi Gutman/Walt Disney Television(MANCHESTER, N.H.) — Iowa’s final results from the first contest of the presidential cycle remain unclear, despite reaching 100% of precincts reporting late Thursday, but since the returns started slowly trickling in, the ground of the 2020 race has shifted, with the Democrats more openly and aggressively drawing contrasts between each other over their competing visions for the country.Now, they will bring the disputes they’ve been battling out on the campaign trail to the debate stage.The matchup, hosted by ABC News, WMUR-TV and Apple News, comes only four days after the Iowa caucuses and less than a week before Granite State voters head to the polls on Tuesday — marking one of their last opportunities to pitch a decisive electorate on why they should be the nominee in July.Here is who is expected to qualify for the Democratic debate:

Biden, who has sought to move past his apparent fourth place finish in Iowa, has been heavily leaning into his experience and ability to campaign up and down the ballot to win over Democratic voters in recent days. He has spent his time back on the trail in New Hampshire going on the offensive, taking aim at Sanders’ embrace of a “socialist” label and Buttigieg’s limited resume to make the case that both are too much of a risk in the fight against President Donald Trump.”If Sen. Sanders is the nominee for the party, every Democrat in America up and down the ballot in blue states, red states, purple states … will have to carry the label Sen. Sanders has chose for himself — chosen for himself,” Biden said Wednesday in Somersworth, noting that Sanders himself carries the label of “Democratic Socialist.”On Buttigieg, Biden called his candidacy “a risk” for the party as a whole due to his lack of political experience since he has not held office “higher than mayor of a town of 100,000 people in Indiana.”“He has enormous potential,” Biden said at the same campaign stop, marking his most direct attacks on his competitors after refraining for most of the race. “But I think we need a president who can bring us together, a leader can unite the party and unite the country.”But even Biden conceded on Iowa, even with some results still outstanding and the potential for final results to come after New Hampshire’s primary.

“I am not going to sugarcoat it, we took a gut punch in Iowa,” he said.After Biden’s more forceful line of attack, Buttigieg countered on ABC’s The View Thursday, contending, “Well, if that argument is about electability, and the ability to win, we just had the first election of the 2020 process, and I think that’s my answer.”Buttigieg’s retort was a nod to another dispute unfolding in the field: Who won Iowa? Two candidates, Buttigieg and Sanders, are currently declaring victory in the first-in-the-nation caucus state — despite the race remaining far too close. Currently, only one tenth of a percentage point separates the two, with Buttigieg slightly edging out Sanders, according to data provided by the Iowa Democratic Party.“When 6,000 more people come out for you in an election than your nearest opponent, we here in Northern New England call that a victory,” Sanders said at a press conference in Manchester Thursday, citing the number of votes by which he is leading Buttigieg in the first alignment, according to the IDP’s results of the popular vote.On the eve of the crucial debate, only days before New Hampshire’s state-run primary, Sanders told ABC News, “Joe is a friend of mine. We’re in the midst of a campaign. I look forward to debating him tomorrow night.”Warren, who is banking on a near home-state advantage in New Hampshire amid a likely third-place finish in Iowa, continues to tout a message of unity on the trail, as she seeks to stay above the fray.“Let’s talk about that for just a minute,” Warren told supporters in Nashua on Wednesday. “What’s it gonna take to win in November? And the answer is first we got to pull our party together. We cannot repeat 2016. We need a united party.”For three of the seven candidates likely to face off, the debate — and Tuesday’s primary — could be a final make-or-break moment for their campaigns as the primary field will likely winnow after more contests.With 100% of statewide precincts reporting from Iowa’s contest, Klobuchar, Yang and Steyer are all poised to finish outside the top four. A fiery showing alongside their competitors on a national stage Friday could be what propels them to a stronger finish in Tuesday’s contest.Based on results from the Iowa Democratic Party, Klobuchar is the best positioned of the three, just four percentage points behind Biden in state delegates, which ultimately decides a winner out of the caucuses.Klobuchar said Friday’s debate will be a “good opportunity” to differentiate herself from the other candidates, as she’s already set her sights on Nevada, the third early contest of the cycle.Despite laying off a number of campaign staffers a day before heading to the stage, Yang is expressing optimism about the road ahead, writing Thursday he’s “excited to compete for the win in New Hampshire on Tuesday!”A political outsider with a promise to give every American adult $1,000 a month, Yang’s ongoing presence in the race while sitting senators and current and former governors have bowed out is itself a remarkable campaign accomplishment.For Steyer, this debate is another opportunity for him to make his case to voters nationally as he looks ahead to the last two contests in February. With millions of his own money to spend, Steyer has the capital to outlast most others in the race.The Democratic Debate, which runs from 8 p.m. (EST) to 11 p.m. (EST), will air live nationally on the ABC Television Network and locally on WMUR-TV.ABC News will livestream the debate on ABC News Live featured on Apple News, Roku, Hulu, AppleTV, Amazon Fire TV, Xumo, YouTube, Facebook, Twitter, and the ABC News site and mobile phone apps.WMUR-TV will also livestream the debate on www.WMUR.com and WMUR’s mobile app.