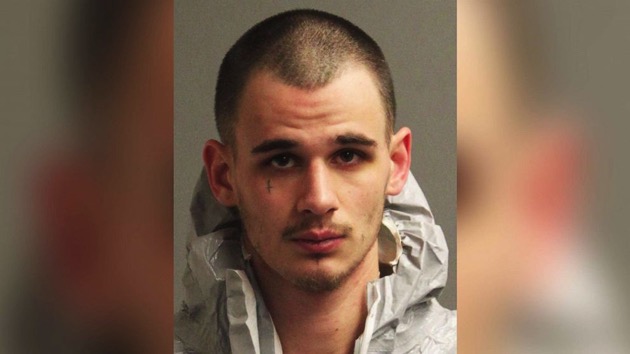 (ANNE ARUNDEL COUNTY, Md.) — A 22-year-old murder suspect has been arrested and charged in the shooting of two Maryland police detectives following a massive manhunt, authorities said Friday.Joseph Robert Mitchell Willis is charged with the murder of 44-year-old Christopher Lawrence Jones in Glen Burnie, Maryland, as well as with the attempted first-degree murder of a police detective, the Anne Arundel County Police Department said. More charges are expected.The investigation began around 5 p.m. Wednesday when officers responded to the homicide investigation in Glen Burnie and determined the victim’s car was missing, police said.By 11 p.m., Anne Arundel County detectives found the car in Baltimore and tried to initiate a traffic stop, but the suspect shot one of the detectives, according to Anne Arundel County Police Sgt. Jacklyn Davis.Another detective continued to chase the shooter, said Davis. The suspect shot multiple rounds at the second detective, hitting him, said Davis.County Executive Steuart Pittman tweeted Thursday afternoon that the two were both out of surgery “and taking their first steps on the road to recovery.”The shootings launched a massive manhunt Wednesday night through Thursday. Officers were going door-to-door and some schools were closed as the search intensified.In a message to the gunman, Anne Arundel County Police Chief Tim Altomare said Thursday morning, “Every minute you stretch this out, it makes it more dangerous for my cops, and thus it makes it more dangerous for you.””We need you to come and turn yourself in,” the chief said at a news conference. “End this lunacy before another person gets hurt.”

Chief Altomare stressed his officers are seriously hurt but stable. They are here now at Shock Trauma in Baltimore. He said both detectives are @AACOPD veterans. @WMAR2News #GMM2 pic.twitter.com/2BlB4atdQu

We are closely monitoring the ongoing investigation, and urge members of the public with any information to call the Anne Arundel Police Criminal Investigation Line at 410-222-3566. This individual is still at large and considered armed and dangerous.

“These brave officers are now in stable condition, and all Marylanders are praying for their full and speedy recovery,” he said.Copyright © 2020, ABC Audio. All rights reserved.