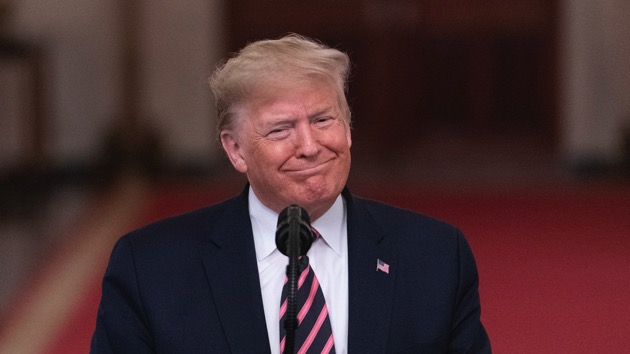 Official White House Photo by Shealah Craighead(WASHINGTON) — President Donald Trump celebrated a court victory against Democratic members of Congress on Friday after a D.C. appeals court tossed out their lawsuit alleging Trump violated a clause in the Constitution that bans presidents from profiting off foreign governments.”We just won the big emoluments case,” Trump told reporters, waving a copy of the ruling as he departed the White House. “It just came out a few minutes ago so I’ll be reading it on the helicopter but it was a total win.”Upon taking office, Trump bucked tradition set by his predecessors by refusing to divest himself of his private business. Democrats have pointed out numerous instances of foreign government officials opting to stay at his D.C. hotel blocks from the White House or his other private resorts as evidence they are seeking to curry favor with his administration.A three judge panel on the D.C. Circuit Court of Appeals, made up of Judge Karen Henderson, a George H.W. Bush appointee, Judge David Tatel, a Clinton appointee and Judge Thomas Griffith, a George W. Bush appointee, found that the Democratic members lack standing to sue.The individual members signed on to the suit do not constitute a majority of Congress, and therefore do not represent the body as a whole, the court found.“Here, regardless of rigor, our conclusion is straightforward because the Members — 29 Senators and 186 Members of the House of Representatives — do not constitute a majority of either body and are, therefore, powerless to approve or deny the President’s acceptance of foreign emoluments,” the opinion states. “We assess this complaint — filed by 215 Members — no differently from our assessment of a complaint filed by a single Member,” the court added.The Court acknowledges that, “Members can and likely will continue to use their weighty voices to make their case to the American people, their colleagues in the Congress and the President himself,” but without the whole of Congress asserting itself through majorities in both houses, the court added, “we will not — indeed we cannot — participate in this debate.”The appeals court cited a 1997 precedent, Raines v. Byrd, a case challenging the use if the line-item veto, in which the Supreme Court held that individual members of Congress do not stand for the entire institution of Congress.The court, however, did not offer any opinion on the substance of Democrats’ emoluments case.A second emoluments cases brought by state attorneys general is still making its way through the courts. Copyright © 2020, ABC Audio. All rights reserved.