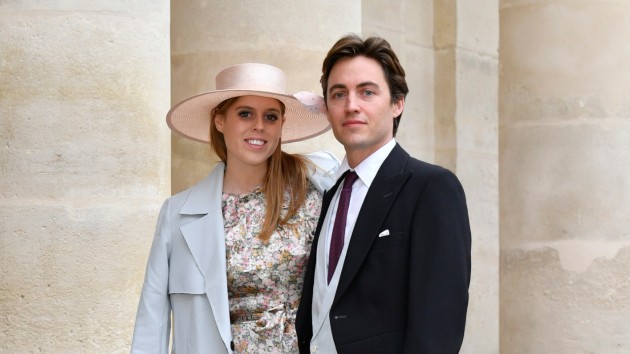 Luc Castel/Getty Images(LONDON) — Get your fascinators ready. Details on the wedding of Princess Beatrice, the eldest daughter of Prince Andrew and Sarah, the Duchess of York, have been announced. Beatrice, 31, will marry Eduardo Mapelli Mozzi, described by the BBC as a “property tycoon,” on Friday, May 29, Buckingham Palace announced Friday.The wedding will take place at the Chapel Royal at St. James’s Palace in London, where Prince George, the son of Beatrice’s cousin Prince William and his wife Kate, was baptized in 2013.A private reception hosted by Beatrice’s grandmother, Queen Elizabeth, will follow in Buckingham Palace’s gardens. Beatrice’s wedding is not expected to be televised like the wedding of her sister Eugenie, which took place in 2018 at St. George’s Chapel in Windsor Castle.The wedding of Beatrice and Mozzi, who got engaged in Italy last year, comes as Britain’s royal family tries to move forward from two high-profile incidents. Beatrice’s father, Prince Andrew, announced last November he would step back from public duties “for the foreseeable future” amid heavy criticism over his relationship with convicted sex offender Jeffrey Epstein, who died in prison from an apparent suicide last year.More recently, federal prosecutors in New York along with the FBI asked to interview Andrew last month as part of an ongoing criminal investigation into Epstein’s co-conspirators. Prince Andrew, Queen Elizabeth’s third child, is being sought as part of a criminal investigation because he had publicly indicated his willingness to cooperate, officials said. Buckingham Palace did not say whether Andrew will walk his daughter down the aisle at her wedding. He has been spotted by Queen Elizabeth’s side since stepping back from public duties, including attending church with her in Sandringham last month.The royals are also still recovering from the bombshell decision by Eugenie’s cousin Prince Harry and his wife Meghan to step down from theur royal roles and no longer serve as working members of the royal family.Harry, Meghan and their 8-month-old son Archie are currently living on Vancouver Island in Canada. Though they have kept their Frogmore Cottage home in the U.K., they plan to spend the majority of their time in North America and may no longer represent Her Majesty. Royal watchers will have to wait and see if Harry and Meghan return to the U.K. to attend the wedding of Beatrice, who was a guest at their wedding in St. George’s Chapel in 2018. Beatrice and Mozzi’s wedding will be the third royal wedding in two years. It is the first of those weddings to take place at the Chapel Royal.Copyright © 2020, ABC Audio. All rights reserved.