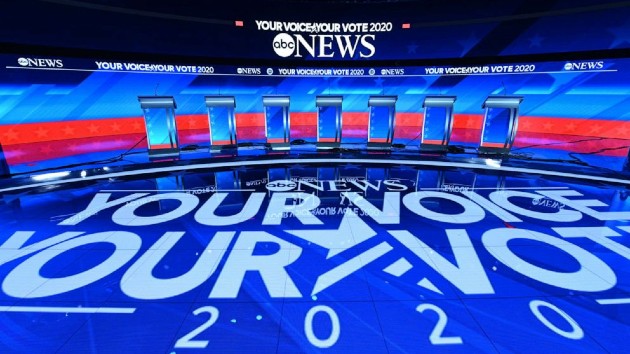 ABC News(MANCHESTER, N.H.) — Seven candidates will face off in the Democratic debate ahead of New Hampshire’s primary election, ABC News announced Friday.ABC News is hosting the eighth Democratic primary debate of the campaign cycle in partnership with Apple News and Hearst Television’s WMUR-TV, ABC’s affiliate station in New Hampshire. The debate, sanctioned by the Democratic National Committee, will take place at Saint Anselm College’s Sullivan Arena in Manchester, New Hampshire.The debate, airing from 8 p.m. to 11 p.m. ET on the ABC Television Network, will feature the following candidates on stage, from left to right as viewed by the audience:

In addition to watching on ABC, viewers can get up-to-the-minute coverage about the candidates and issues as the debate unfolds on the iPhone’s free Apple News app. Not only can viewers watch the debate, but they can click on a feed of live updates to see more information, including real-time updates, analysis and explainer guides from ABC News’ top correspondents and experts.Chief Anchor George Stephanopoulos, World News Tonight Anchor and Managing Editor David Muir and ABC News Live Anchor Linsey Davis will moderate the debate. Joining them will be WMUR-TV Political Director Adam Sexton and WMUR-TV News Anchor Monica Hernandez.Candidates will have one minute and 15 seconds to answer direct questions and 45 seconds for rebuttals, at the discretion of the moderators. Candidates will not make opening or closing statements, but there will be a closing question.The podium order was determined by averaging the candidates’ qualifying polls as certified by the DNC. Polls had to be publicly released between Dec. 13 and 11:59 p.m. Thursday.The presidential hopefuls had two ways to meet the polling threshold.The first path was the four-poll threshold: Candidates had to get at least 5% support in four national polls or polls conducted in New Hampshire, Nevada and/or South Carolina. In order to count as qualifying polls, the polls had to be sponsored by different organizations, or if sponsored by the same organization, covering different geographical areas.The second path was the early state polling threshold: Candidates had to get at least 7% support in two polls conducted in New Hampshire, Nevada and/or South Carolina. Unlike the first path, these polls could be sponsored by the same organization and could also be conducted in the same geographical area.The polls had to be sponsored by one of the organizations or pairs of organizations from the following list determined by the DNC: Associated Press; ABC News/Washington Post; CBS News/YouGov; CNN; Fox News; Monmouth University; NPR/PBS Newshour/Marist; NBC News/Wall Street Journal; NBC News/Marist; New York Times/Siena College; Nevada Independent/Mellman Group; Quinnipiac University; University of New Hampshire; USA Today/Suffolk University; Winthrop University.By ABC News’ count, there were 22 qualifying polls released in the qualifying period for this debate.Candidates also had to meet a grassroots fundraising threshold to qualify. They had to accrue at least 225,000 individual donors, and they had to have a minimum of 1,000 unique donors per state in at least 20 U.S. states, U.S. territories or the District of Columbia.The deadline to achieve this was also 11:59 p.m. Thursday.When the DNC announced the qualifying criteria for this debate, candidates had another way to secure their place on stage — by being awarded at least one pledged delegate to the Democratic National Convention from Monday’s Iowa Caucus. However, given the issues with reporting results, and DNC Chairman Tom Perez’s call for a recanvass Thursday, the Iowa Democratic Party has not announced who has received delegates, and the candidates who qualified submitted for certification based on polling and fundraising thresholds.