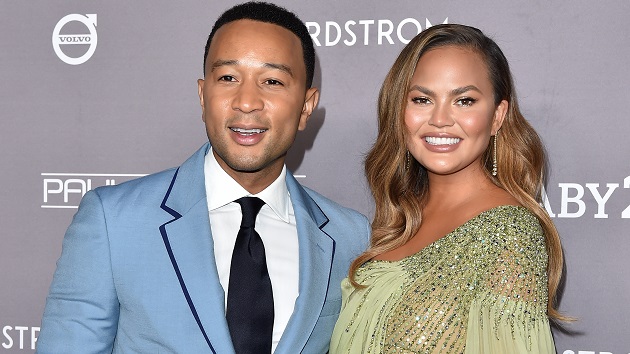 Axelle/Bauer-Griffin/FilmMagic(LOS ANGELES) — Nothing says “I love you” more than wearing your husband’s face on a new pair of leggings.  Well, only if you’re Chrissy Teigen, that is.

The Bring the Funny host honored husband John Legend in the most unique way on Thursday, by wearing custom-made leggings that bore his mug, surrounded by a big red heart, on her derrière.  Well, to be accurate, there was a ratio of one face per cheek.

The pants even had a pink and red rainbow up the sides that ended at the hearts, which made their design all the more outrageous and hilarious.

However, while Teigen was more than happy to model her wardrobe, she admitted that she wasn’t the mastermind behind them.

“We get … really random stuff sent to the house,” Revealed Teigen against the photo of her seductively modeling the eye-catching leggings.

Then again, her pose was of her crouching with her rear turned to the camera, as it was probably the only way to completely show off the custom design.

As for who actually created the pants?

Apparently, several famous friends have come forward claiming it was all their doing.

Queer Eye’s Antoni Brown was first to seemingly out himself in the comments’ section by cheekily writing, “I’m happy you’re enjoying them,” along with a red heart emoji.

Then again, model Karlie Kloss also fessed up to being the mystery sender by writing, “Okay guilty it was me.”

It is unknown who is telling the truth or who Teigen truly believes.  But, in the end, she scored a new pair of pants perfect for Valentine’s Day — and also perfect for taunting her husband, who was recently crowned People’s Sexiest Man Alive.