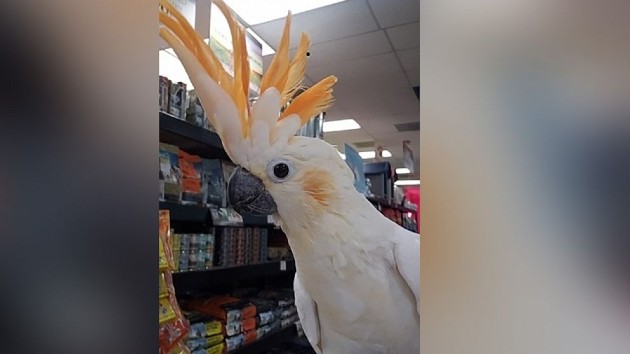 Palmdale Sheriff’s Station(PALMDALE, Calif.) — Detectives are seeking the public’s help in locating two exotic birds that were snatched from a pet store in Southern California last month. Cleo, a citron-crested cockatoo, and Yoda, a Goffin’s cockatoo, were stolen on the night of Jan. 25 from High Country Feed & Pets in Palmdale, about 65 miles north of Los Angeles, according to a bulletin from the Los Angeles County Sheriff’s Department, Palmdale Station.Surveillance cameras captured the moment the thieves broke into the store hours after it had closed and took the feathered pair from their cages.The parrots retail for about $2,000 each, according to Los Angeles ABC station KABC-TV.In a recent post on its Facebook page, the pet store announced that it’s offering a cash reward to anyone who helps bring Cleo and Yoda back safely. There are concerns the birds may be injured.ABC News has reached out to the store owner for comment.Anyone with information on the incident is encouraged to contact Palmdale Sheriff’s Station detectives at 661-272-2456. People can also submit anonymous tips to crimestoppers.com or by calling 1-800-222-TIPS.Copyright © 2020, ABC Audio. All rights reserved.