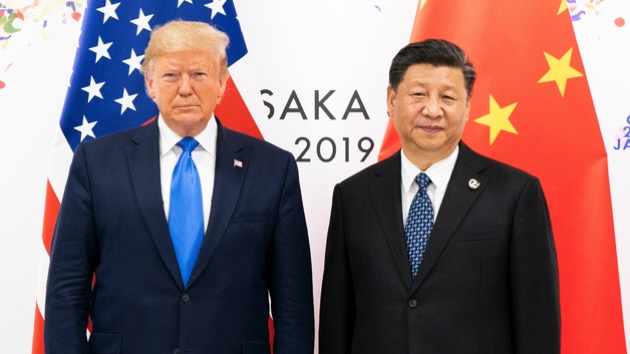 Official White House Photo by Shealah Craighead(WASHINGTON) — President Donald Trump said Friday he is not concerned that China might be covering up the full extent of the coronavirus after speaking on Thursday with China’s leader Xi Jinping, who he said has been “strong, sharp and powerfully focused” in his efforts to fight to the spread of the virus.“No, China’s working very hard,” Trump told ABC News’ Karen Travers. “Late last night I had a very good talk with President XI and we talked about mostly about the coronavirus. They’re working really hard and I think they’re doing a very professional job. They’re in touch with the world health organization, CDC also.””It’s a tough situation. I think they’re doing a very good job,” Trump said.Asked if he has concerns about the potential impact on the global economy, the president did not directly answer but said “I think that China will do a very good job.”In a set of tweets early Friday, the president praised Xi and expressed confidence in the Chinese government’s handling of the epidemic, which has infected over 28,000 and killed more than 500 people in China since it was detected in December.“He feels they are doing very well, even building hospitals in a matter of only days. Nothing is easy, but he will be successful,” Trump wrote on Twitter of his call with Xi, writing that “great discipline is taking place in China.”

….he will be successful, especially as the weather starts to warm & the virus hopefully becomes weaker, and then gone. Great discipline is taking place in China, as President Xi strongly leads what will be a very successful operation. We are working closely with China to help!

The president’s call with Xi comes after the United States last week announced a temporary ban on foreigners who have traveled to China within the last 14 days from entering the U.S.The White House on Thursday asked U.S. scientists and medical researchers to investigate the scientific origins of the novel coronavirus, as misinformation about the outbreak spreads online.In the United States, 12 confirmed cases have been reported in Wisconsin, California, Washington, Arizona, Massachusetts and Illinois. The World Health Organization has declared the outbreak a global health emergency.The U.S. has evacuated Americans from the Chinese city of Wuhan, the outbreak’s epicenter, and imposed strict entry restrictions on travelers who have recently spent time in China. Copyright © 2020, ABC Audio. All rights reserved.