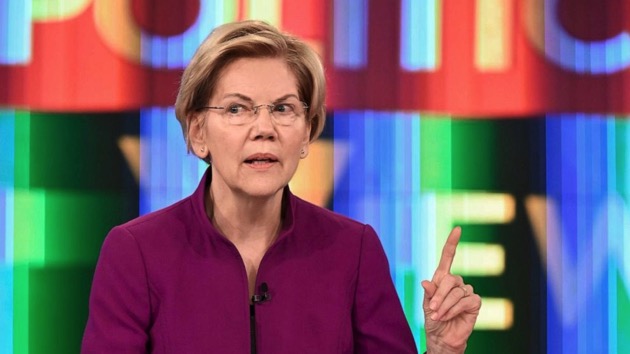 ABC (DERRY, N.H.) — Democratic presidential candidate Sen. Elizabeth Warren has apologized for the alleged toxic culture in her Nevada campaign office after reports of six women of color leaving.“So I believe these women completely and without reservation. And I apologize that they have had a bad experience on this campaign,” Warren told ABC News Thursday. “I try to build a campaign and an organization that is diverse and welcoming, that celebrates people, that encourages people to bring their whole selves to work every single day.”Megan Lewis, one of Warren’s field organizers in Nevada, said she left in December because she had persistent feelings there was something wrong with the workplace culture there.”I was left feeling that the only way for me to feel comfortable was to conceal myself,” Lewis told ABC News in a phone interview. “I felt like I was encouraged to act more white, at least, less black.”Lewis said that there were micro-aggressions and unfair preferential treatment, among other things that contributed to the toxic work environment. She said she hoped that her speaking out “starts a conversation that helps facilitate personal reflection about ways we can change toxic campaign culture.”Lewis said that she felt she was “never able to establish boundaries” when it came to her “personal life,” and that “micromanagement discouraged any kind of independent work or decision making,” she added in a written statement to ABC News.”During check-ins with other staff the consensus was a need to keep our heads down to avoid the daily confrontation and try to make it through Election Day. Many passive aggressive comments, withholding of information/feedback and lack of leadership left me feeling like I didn’t have any other choice but to resign from the campaign to find better opportunities,” Lewis wrote.The story was first reported in Politico. The Nevada caucuses are Feb. 22.At a campaign event in Derry, N.H., Thursday night, Warren said she is addressing the concerns with her campaign.“I also understand the long legacy of racism in this country, and what it means, how it creates power dynamics and inequities that are toxic and dangerous,” Warren said. “And that’s why it’s so important that we be constantly vigilant and determined to do better.”This comes at a crucial time for Warren on the campaign trail, just ahead of the ABC/WMUR/Apple News Democratic primary debate in Manchester, N.H., before next Tuesday’s crucial state primary.”I want to create enough space in our offices to make sure that we’re hearing from everyone, and to determine where there may be other concerns,” Warren said. “It is important that we stay vigilant. These women have been courageous to come forward. And again, I apologize.”Lewis adds that despite her departure from the campaign, she still plans to caucus for Warren later this month in Nevada. Copyright © 2020, ABC Audio. All rights reserved.