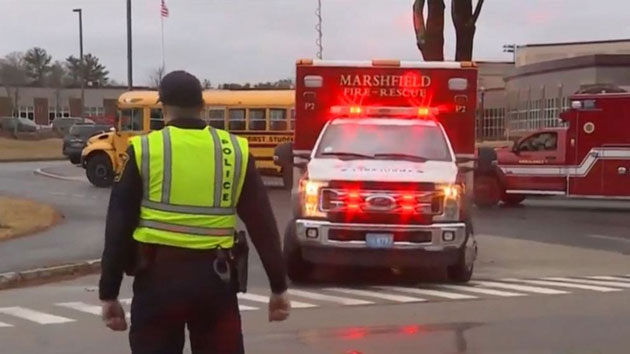 WCVB-TV(BOSTON) — Students and staffers at a Massachusetts high school were hospitalized Friday after they were overcome by a mysterious odor in the building.Approximately 40 students and staffers at Silver Lake Regional High School in Kingston were taken by ambulance to local hospitals after becoming nauseous from the odor, according to Boston ABC affiliate WCVB.Dozens of ambulances were used to ferry the sick to area hospitals throughout the morning and afternoon.Many of the students had to leave books and book bags behind.In addition to nausea, symptoms included dizziness, scratchy throat and watery eyes, witnesses said.”They just felt really lightheaded and nauseous,” one student told WCVB.”I saw a girl in a wheelchair,” said another student. “And that’s when we were all like, ‘OK, what’s going on?"”Authorities were not immediately able to determine what caused the odor, said fire officials in Kingston, about 40 miles south of Boston.The school was closed after the incident, and basketball games scheduled for Friday afternoon were canceled.The building will be professionally cleaned over the weekend, WCVB reported.Officials said they believed everyone who felt sick would make a full recovery. Copyright © 2020, ABC Audio. All rights reserved.