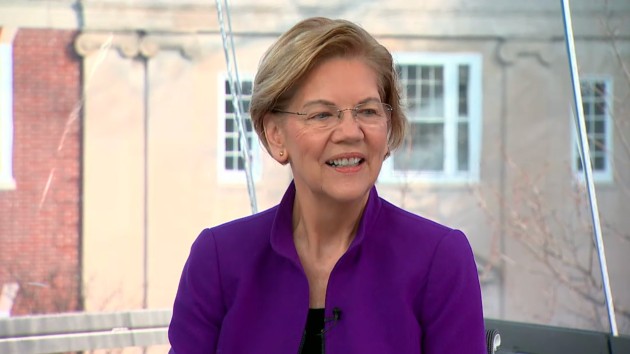 ABC News(WASHINGTON) — After Sen. Elizabeth Warren’s third-place finish in Iowa, she said Sunday that she’s built her campaign to go beyond Iowa or New Hampshire.”Look, the way I see this is it’s going to be a long campaign … we’ve built a campaign to go the distance,” the Massachusetts senator said on ABC’s This Week.Her interview with ABC News’ Chief Anchor George Stephanopoulos comes on the heels of the eighth Democratic debate, where she took the stage with six other candidates to defend her place in the top tier of the race and contend with changing dynamics after the Iowa caucuses.She is leaning on her potential neighboring-state advantage in hopes of a comeback in New Hampshire, telling crowds that being there feels like being with family. But she’ll have to vie for that backyard boost with Sen. Bernie Sanders, I-Vt., who won the state in 2016 against Hillary Clinton and currently leads polls here.”There are a lot of folks who are going to talk about what’s not winnable, what can’t be done,” Warren said to cheers Saturday in Manchester. “The way I look at this. I’ve been winning unwinnable fights pretty much all my life — we persist and we win.”