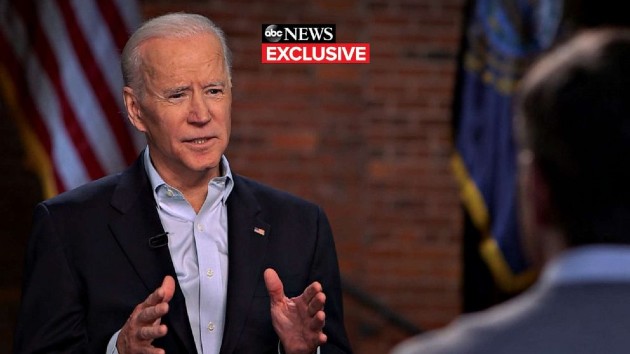 ABC News(WASHINGTON) — Former Vice President Joe Biden ramped up his criticism of former South Bend, Indiana, Mayor Pete Buttigieg, telling ABC News Chief Anchor George Stephanopoulos that the 38-year-old, fresh off an impressive performance in the Iowa caucus, hasn’t demonstrated he can unify African Americans or minorities.”I’m saying he hasn’t been able to unify the black community — that’s what I’m saying,” Biden said in an interview Saturday, pointing out that black legislators in Buttigieg’s hometown have endorsed Biden instead of the former mayor.Biden reiterated his belief that no Democrat can win the party’s presidential nomination nor defeat President Donald Trump in a general election without earning the support of the African American community.”In order to win, George, you’re going to have to be able to win states like Pennsylvania,” Biden continued. “You’re gonna have to be able to win Florida. To have to be able to win a lot of places that, in fact, have very diverse populations. And so the assertion that he’s ready across the board, I don’t see it. I haven’t seen it yet.”The criticism comes just hours after Biden’s campaign released a digital video mocking Buttigieg’s tenure as mayor of South Bend, particularly the demotion of the city’s African American police chief and what they claim was the forcing out of the city’s African American fire chief.”When public pressure mounted against him, former Mayor Pete fired the first African American Police Chief of South Bend. And then he forced out the African American fire chief, too,” says the video, posted to Biden’s Twitter account.Buttigieg has maintained that he demoted the city’s police chief, Darryl Boykins, to the rank of captain, because of the chief’s failure to inform him that the department was under federal investigation amid reports that Boykins allegedly had ordered people to secretly record racist comments by senior white police officers.Howard Buchanon, the city’s fire chief for five years, had originally submitted retirement papers in 2010, but after Buttigieg’s election informed him that he no longer wanted to retire. By that point Buttigieg had already named a replacement for Buchanon, who eventually retired in 2012.