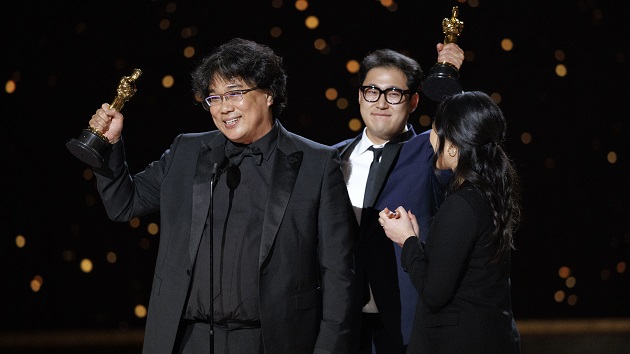 ABC/CRAIG SJODIN(LOS ANGELES) — Parasite director Bong Joon-ho is ready to party after winning the Academy Award for Best Director.  However, the best was yet to come as he closed out the awards show for winning Best Picture.

The South Korean director took home the award for his work on Parasite on Sunday. The film won a total of five awards on Sunday.

After joking that he thought he was done winning awards for the night, Bong took a moment to pay tribute to his fellow nominees, specifically The Irishman’s Martin Scorsese and Once Upon A Time In Hollywood’s Quentin Tarantino. The Joker’s Todd Philips and 1917’s Sam Mendes were also nominated in the category.

With his speech completed and the award for Best Director in the bag, Bong made it clear was ready to celebrate.

“I will drink until next morning,” he said.

But, Bong had to put down the drink after it was announced he won the biggest award of the night, Best Picture.  The cast and crew stood agape on the stage and admitted they were at a loss for words, as they weren’t expecting the win.

The suspenseful South Korean film, which focuses on class distinction through the relationships of the Park and Kim families, also won the Oscar for best original screenplay and best director.

It should be noted Parasite won the first Academy Award for South Korea.