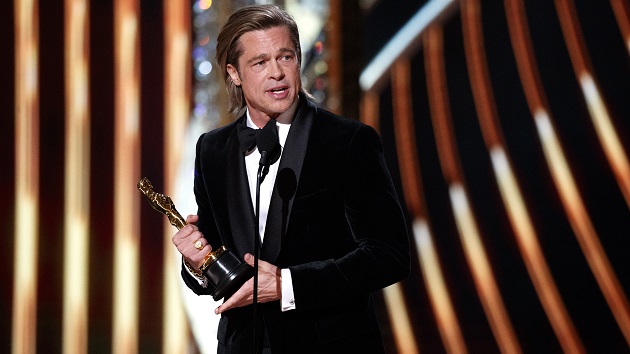 Pitt took home the Oscar for Best Supporting Actor for his role in Quentin Tarantino’s Once Upon a Time…In Hollywood, beating out fellow nominees Anthony Hopkins, Joe Pesci, Al Pacino and Tom Hanks.

The A-lister briefly touched upon politics in his acceptance speech, joking that the 45 seconds he was given to speak is 45 more than “the Senate gave [former national security adviser] John Bolton this week” during the impeachment trial.

To his costar, Leonardo DiCaprio, Pitt smiled, “Leo, I’ll ride on your coattails any day, man. The view is fantastic. “

Pitt ended his speech with a shout-out to his six children with ex-wife Angelina Jolie.

“This is for my kids who color everything I do,” he said. “I adore you.”

He was presented the award by Regina King, who won the Oscar for Best Supporting Actress last year for If Beale Street Could Talk.