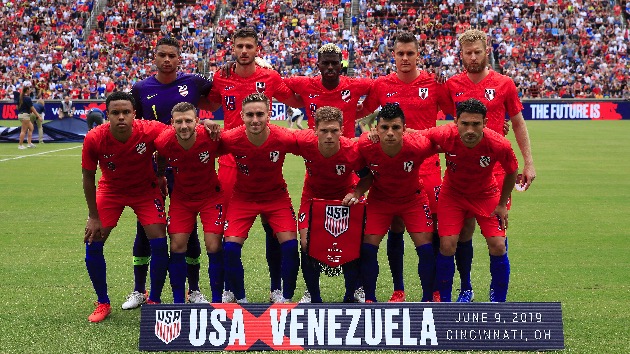 Andy Lyons/Getty Images(NEW YORK) — Soccer fans the world over are known for their loud and unwavering support — just as America’s men’s team now backs the women’s.Members of the U.S. men’s national soccer team again are voicing support for their female counterparts, ahead of the women’s national team’s gender discrimination trial in May that involves the U.S. Soccer Federation.How the men are supporting the womenIn a lengthy and emphatic statement released Wednesday by the United States National Soccer Team Players Association, the union sounded off about U.S. Soccer’s “false narrative” regarding collective bargaining agreements and equal pay.”The Federation has been working very hard to sell a false narrative to the public and even to members of Congress,” the statement read, adding that the federation has used it “as a weapon against current and former members of the United States Women’s National Team.”The association said it has long left the women’s players and their representatives to pursue any grievances on their own, but decided now to back them due to the “success” of the federation’s narrative.”By coming forward to explain the situation, the USNSTPA hopes to create a better understanding and perhaps help bring about a resolution,” the statement continued.The men’s statement further broke down why equal pay in soccer matters now more than ever, particularly in comparing the women’s CBA from April 2017 to the men’s from 2011 to 2018.”What we believe should happen is simple,” the men’s union said. “Pay the women significantly more than our recently expired men’s deal. In our estimation, the women were due at least triple what our expired deal was worth in player compensation.”U.S. soccer has not yet responded to the union’s statement.How we got hereU.S. Soccer historically has “resisted any concept of equal pay or basic economic fairness for the USWNT players” and “refused” to include the same provisions in CBAs with the women’s team.”This is systematic gender discrimination that should have never happened,” the men’s union added.Historically, the men have negotiated their CBA with U.S. Soccer before the women, setting the stage for those talks.When the women’s team negotiated its most recent CBA, in April 2017, the federation’s revenue had grown by more than $33 million since 2011, according to the USNSTPA.”The expectation was for dramatic increases in their compensation, comparable to the Federation’s triple-digit increases in revenue,” the USNSTPA said. “The women’s 2017-2021 CBA did not bring the women equality in working conditions and the women did not benefit from the dramatic increase in revenue associated with the USWNT.”The men’s union also is claiming U.S. Soccer potentially is spending millions on legal expenses that instead could be be used to pay players.Last March, 28 members of the 2015 Women’s World Cup champion team filed a class-action gender discrimination lawsuit against the federation, after years of publicly demanding equal pay. A trial is set for May 5.”The USSF has utterly failed to promote gender equality,” the lawsuit reads. “It has stubbornly refused to treat its female employees who are members of the [women’s national team] equally to its male employees.”The U.S. Soccer Federation did not immediately respond to a request for comment from ABC News.Copyright © 2020, ABC Audio. All rights reserved.

“Get ready for a ride” — ‘No Time to Die’ director Cary Fukunaga teases Daniel Craig’s final James Bond film
Jif teams up with GIPHY to help you pronounce GIF properly once and for all
US military dependent in South Korea diagnosed with coronavirus, triggering precautions
Trump says coronavirus ‘under control’ in US, problem going to ‘go away’
Trump hails Weinstein conviction as ‘victory’ for women
Sanders slammed by pro-Israel group for boycotting their conference