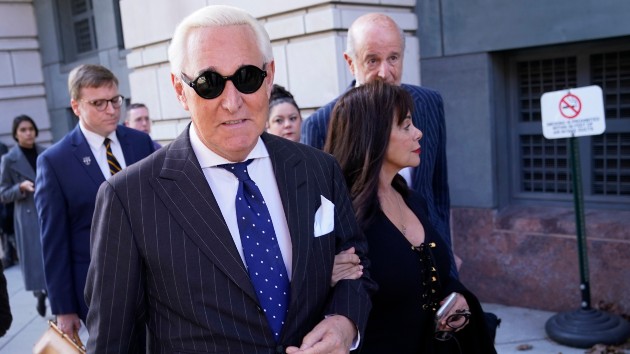 Win McNamee/Getty Images(WASHINGTON) — With his sentencing fast approaching, Roger Stone is bolstering his defense team with a veteran criminal defense attorney whose past roster of clients included John Gotti Jr. and other high-profile figures allegedly involved in organized crime.New York attorney Seth Ginsberg has an extensive background in criminal defense work. In a filing this week, Judge Amy Berman Jackson granted Stone’s request to bring Ginsberg onto his team.”Roger has an excellent team of attorneys and I’m very pleased he’s asked me to assist them,” Ginsberg told ABC News on Thursday. Ginsberg added that he was brought on to help Stone’s legal team with their sentencing strategy.Ginsberg has had a colorful career inside and outside the courthouse. At one point, in 2010, he was banned from a Manhattan federal detention center after he was caught walking in with marijuana in his bag while on his way to visit an alleged associate of the Gambino crime family.He also previously represented an alleged member of the Luchese crime family.Last November, Stone — President Donald Trump’s longtime friend and former campaign adviser — was tried and found guilty of all charges in the seven-count indictment brought against him by former special counsel Robert Mueller’s probe into Russian interference in the 2016 U.S. presidential election. Stone, who pleaded not guilty to all charges, has maintained his innocence since his initial arrest during a pre-dawn FBI raid on his home Jan. 25, 2019. He was found guilty of obstructing a congressional inquiry, witness tampering, and five counts of lying to Congress.The move comes after Stone’s case unexpectedly touched off a major firestorm in Washington this week.When prosecutors filed a memo recommending a sentencing guideline of seven to nine years in prison for Stone on Monday evening, it prompted Trump to tweet overnight that the recommendation reflected a “miscarriage of justice” and was a “horrible and very unfair situation.”On Tuesday, the Department of Justice made a highly scrutinized decision to overrule the sentencing recommendation made by the federal prosecutors who successfully convicted Stone of all counts brought against him by Mueller’s team. The reversal prompted all four line prosecutors on the case to withdraw from the case, and one of the four to leave DOJ entirely.In an exclusive interview with ABC News on Thursday, Attorney General Bill Barr told fiercely defended his actions in the case and said the Justice Department’s reversal on Stone’s sentencing recommendation had nothing to do with the president. He said he was supportive of Stone’s convictions but thought the initial sentencing recommendation of seven to nine years was excessive.Judge Jackson is scheduled to sentence Stone on Feb. 20.Copyright © 2020, ABC Audio. All rights reserved.